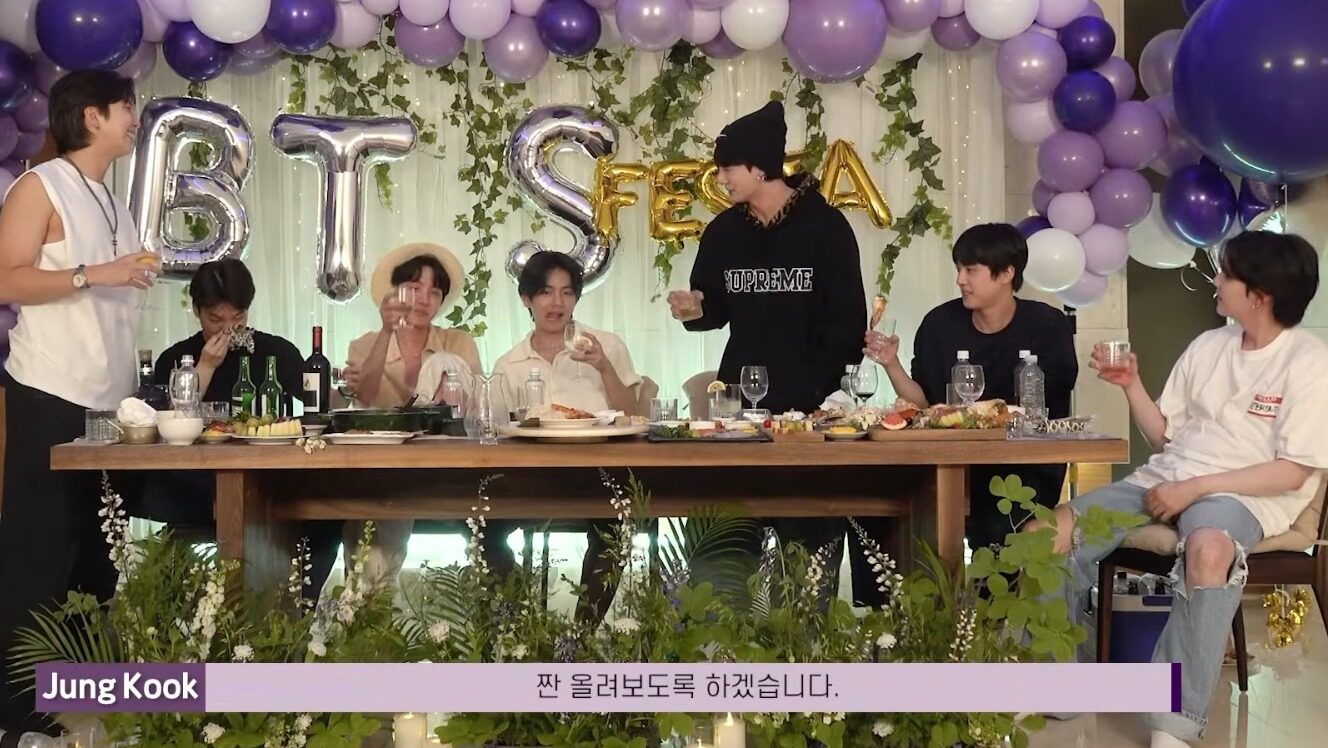 The moment all ARMYs have been dreading has finally arrived. Earlier today, at their annual band anniversary dinner, BTS announced they’d be reducing their group activities in order to focus on solo projects.

Although the word “hiatus” was used in the English subtitles during the pre-taped stream, which was broadcast on Youtube, the band’s label HYBE has since released a statement correcting the information. “BTS are not taking a hiatus,” it noted. “Members will be focusing more on solo projects at this time.”

The band got personal over their feelings towards the current state of the group, as RM opened up about how he’s been feeling uninspired ever since BTS released their back-to-back English language singles Butter and Permission to Dance, hitting a metaphorical wall when it came to his identity as an artist and his contribute to the band as its leader and main lyricist.

The members all seemed to agree that some time to focus on their own careers would be the healthiest move going forward, in order to come back stronger as a unit. BTS debuted in June of 2013, with 2022 marking their 9th anniversary. The band had just released an anthology album titled Proof earlier this month, featuring lead single “Yet To Come” which served as a preface for the break announcement they made today.

So what comes next? As is expected after most groups announce this type of break, artists turn to their own solo efforts, building their personal spaces and voices in the industry. There’s always fear that a future reunion might get trampled by their ever busy solo schedules, but if HYBE’s statement is anything to go by, BTS are very much still together and will likely continue some group activities.

BTS, and the K-Pop music industry in general, have a bigger tradition of offering up space for each member to work on solo projects. As a result, SUGA, j-hope and RM have all released solo mixtapes in the past. Jimin, V, Jin and Jungkook have also put out original songs.

For RM, juggling between his schedule with the band and his own solo work came relatively easy to him when he was younger. But it was getting progressively harder in recent times. As a result, the rapper-songwriter felt he was no longer helping himself or his fellow members with the quality of his work.

Each BTS member has a solo album lined up that will receive a level of promotion and attention much greater than past mixtapes and solo songs were granted. From what the members shared, as they drank and ate together in celebration of their nine years together, the preparations for these projects are well underway, and some already have release dates lined up. The first to kick-off his solo career is expected to be j-hope, who has even been announced as a headliner at Lollapalooza this July.

Besides these predicted seven albums, RM also mentioned the band intends to continue producing their variety show Run BTS! which airs on the VLive website, and is also currently on hiatus. This has given fans hope that they will be able to see the members all together throughout the break.

It is also expected that RM, Jin, SUGA, j-hope, Jimin, V, and Jungkook should all stay under their label HYBE as solo artists, which creates more opportunities for collaborations. SUGA was quick to note the band is not disbanding, which probably means they will stay under contract with HYBE and maybe retain some of their commitments as BTS.

Earlier this week, Kpop_Herald, a popular K-POP news outlet, announced a reality show inspired by BTS: In The Soop, now entitled In The Soop: Friendship Trip, which will feature BTS’ V, alongside Parasite‘s Park Seo-joon and Choi Woo-shik, as well as their Hwarang‘s co-star, Park Hyung-sik. This isn’t the first time fans have seen V on the television screen, considering the singer has also had a main role on the historical drama Hwarang.

The members’ constant contact with fans through social media is expected to continue, with livestreams, interactions, and Q&As.

One threat always looms in the distance, however. Military service is mandatory for every young man in South Korea. In BTS’ case, they must complete it before they turn 30 — a date which is just around the corner for older members Jin and SUGA. The service lasts at least 18 months, during which the artists can’t carry out any of their professional engagements. It’s hard to tell what this might mean for the solo plans of these two members.

As much as hiatus announcements are common among all-vocal groups, it’s important to remember that in BTS’ case, the members’ goals and intentions were group-oriented from the start. Besides RM, each member knowingly entered auditions to join a group, with the final line-up going through a strict training process before debuting. For BTS, then, solo careers are something temporary, necessary for them to grow as people and artists, but always keeping Bangtan Sonyeondan (BTS’ Korean name) as their main focus.

As RM said as he held back tears, he will always be “RM of Bangtan Sonyeondan.” A sentiment most definitely shared by each member, in case their matching “7” tattoos weren’t enough proof.