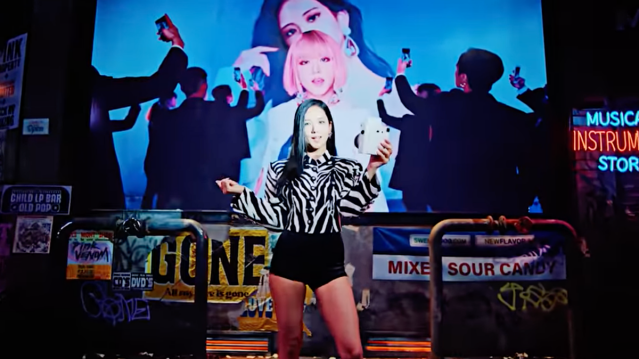 Two years after the release of their debut album, aptly titled The Album, BLACKPINK is back with Born Pink, the band’s sophomore effort which sees Rosé, Jisoo, Lisa, and Jennie take on eight perfectly pop tracks, which deliver, to varying degrees, the type of bite they’ve accustomed their audiences to.

Fans were initially unhappy with Born Pink‘s length (with only eight tracks, the album runs for just a little over 24 minutes), but, in true BLACKPINK fashion, Born Pink is already breaking records after registering the highest number of first day sales by a girl group on Hanteo, one of Korea’s most important music charts.

Altogether an energetic and surprisingly vulnerable work, here is a closer look at each song on BLACKPINK’s Born Pink album, ranked from weakest to strongest.

Arguably the most forgettable song on the album, but no less fit to close off Born Pink, “Ready for Love” is your run-of-the-mill dance-pop summer song, which was released by BLACKPINK as a promotional single for their collaboration with the video game PUBG Mobile back in 2021.

Fully sung in Korean, with the exception of Lisa’s rap verse in English, “Ready For Love” is a song about being ready for commitment when the person you want to commit to isn’t on the same page. Its infectious beat and mostly instrumental electronic chorus make this an enjoyable song to dance your worries away, without, however, leaving its mark on the album as a whole. As a closing track, “Ready For Love” is still effective, though, finishing off Born Pink on a high note, with the band’s signature vibrant sound, silky vocals and powerful beat drops.

“Yeah Yeah Yeah” comes on a rather ungrateful spot on Born Pink right after the three opening bangers, two of which serve as singles for the album, so it’s hardly a surprise that it might fall a little flat. The groovy base line which opens up the song hints at a rockier sound than what “Yeah Yeah Yeah” ends up offering, as it slowly morphs into synthetic disco-pop by the time the chorus comes along.

This song about a surprising attraction is the only track on the album in which BLACKPINK members feature as songwriters, and whether or not the reason is Jisoo and Rosé’s contributions to the lyrics, “Yeah Yeah Yeah” has some of the most interesting and insightful lines on Born Pink. However, that’s still not enough to make up for the song’s lackluster chorus and disappointing fade-out ending.

Honestly, “Typa Girl” is one of the absolutely coolest songs on Born Pink and pure BLACKPINK fire. Its hip-hop influences and sensual, yet provocative production would make this a top contender for the album podium, if it weren’t for the questionable lyrics feigning female empowerment.

Throughout, Jisoo, Rosé, Jennie, and Lisa gloat about how rich, sexy, and successful they are, and that would be all good – encouraged even – if it weren’t for the unnecessary slight digs at other women. “I’m not like these other girls at all,” is a tired line that should be left in the past and doesn’t really belong in any worthy bad bitch anthem.

The only solo song on Born Pink, “Hard To Love” is a pop-disco song performed by Rosé, where she shares her imperfections and insecurities when it comes to starting a relationship. The lyrics are quite generic, and considering Rosé didn’t take part in the songwriting process at all, it’s hard to say how much of them actually resonate with the singer.

Rosé elevates “Hard To Love”, however, with her singular ability to interpret any song, as her voice drips with feeling just as though she meant every word.

The first single from Born Pink to be released, and the song tasked with launching a brand new BLACKPINK era, “Pink Venom” is one of the most divisive songs on the record. Some love it, some can’t quite get over its faults.

Despite its choppy and disjunctive production, “Pink Venom” is still incredibly effective at setting the mood for the rest of the album, and has a type of flavor that arguably no other song on Born Pink can bring to the table. It’s its fun, creative elements that end up saving the song, like the rousing repetitive BLACKPINK war chants in the background, the traditional Korean zither that opens the song, and the interpolation of Rihanna’s “Pon de Replay”.

“Shut Down” serves as Born Pink‘s title track, which in the K-Pop world just means the main song used to promote an album, or the most important single. The diss vibe of “Shut Down”, as well as its music video paying homage to BLACKPINK’s groundbreaking career since their debut in 2016, make this title track one for the ages.

Although it doesn’t offer anything new to BLACKPINK’s usual sound, it makes the most of what the girl band does best: statement lyrics, over the catchiest possible beat, with the added bonus of the unusual choice to feature a violin sample from famous Italian composer and violinist Niccolò Paganini. Talk about worlds colliding.

This might be an unorthodox pick for second best song on Born Pink, but hear us out. When we think BLACKPINK, heartfelt ballad isn’t the first thing that comes to mind, but maybe that should change in the future if “The Happiest Girl” is anything to go by. In the sixth track on the album, the members reveal a different, more grounded side as performers over a simple piano backdrop.

There’s a clever contrast between the song’s title and its somber tone and emotional lyrics. In “The Happiest Girl”, BLACKPINK aren’t happy at all, but actually convincing themselves of the front they must put on in order to hide their true emotions. It’s a beautiful, arresting heartbreak ballad, that gives Born Pink some welcome sonic and thematic texture.

“Tally” might be the most mature song on Born Pink. Although it carries a lot of the same themes that Blinks have known and loved in BLACKPINK’s music, it delivers its message in a way that feels a lot more earned. Again, the band members didn’t contribute to the songwriting, so there’s no specificity to “Tally”‘s lyrics at all (it could be sung by absolutely any other artist in the world, and still hold some truth), but it fits BLACKPINK like a glove.

It’s a rebellious song, where the girls get explicit in their language more than once but, much like the lyrics affirm, “no one’s keeping tally”. It’s BLACKPINK breaking free from the roles the music industry and our surveillance society as a whole impose on young women, especially those in the public eye, all while highlighting the double standard in the treatment of men. Sonically, this is also one of the most cohesive songs on Born Pink and a good omen for what the future might reserve for the biggest girl group of its generation.

We Got This Covered’s full review of Born Pink will be available soon.