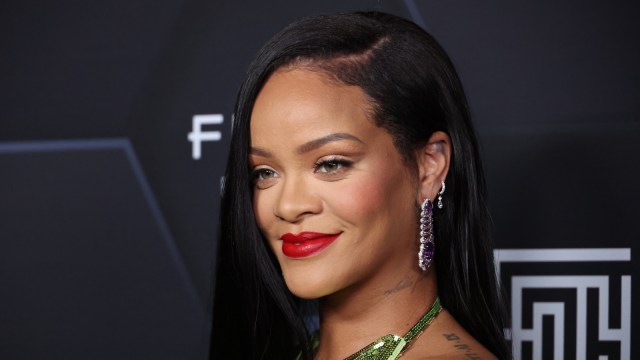 Absolutely brilliant and exhilarating news for fans of both Rihanna and Black Panther, as the long-silent singer appears to finally be ready to return to music, and she’s seemingly doing it for what’s set to be the biggest movie of the year: Black Panther: Wakanda Forever.

Marvel Studios took to Twitter to share the exciting news earlier today, giving us the only teaser we need: The film’s official logo, with all other letters besides a single ‘R’ fading into obscurity, with the date of Oct. 28, 2022, beneath it.

Naturally, Rihanna’s millions of fans around the world have collectively lost it.

For those who doubt the announcement’s association with Rihanna, the artist-turned-mogul has long used the solo ‘R’ across her brands, whether it be album covers or her Fenty designs and make-up lines. Not only that, but it’s been rumored for a few weeks that the hitmaker had contributed in some aspect to the film’s soundtrack.

The announcement was even made smack-bang in the middle of Times Square, which Marvel wouldn’t do for just any old artist.

The new track, arriving on Friday (the standard date for releasing new music), would mark Rihanna’s first song with her as the lead artist since the release of her 2016 album ANTI. Since then, she’s famously become a fashion and cosmetics mogul, while also giving birth to her first child with rapper A$AP Rocky.

Historically, the Black Panther OST has been an incredibly big deal, with the previous curator Kendrick Lamar enjoying massive success with his work on the first one, especially the lead single “All The Stars” alongside SZA. In fact, the album was so highly acclaimed that it scored a nomination for Album of the Year at the 2019 Grammys.

While we’ll have to wait for confirmation from RiRi herself as to whether the entire internet is wrong about this (unlikely!), we do know that Rihanna’s return to music is imminent after being announced as the headliner for the 2023 Superbowl half-time show.

It’s been a big day for Rihanna already, after she announced the lineup for her fourth official Savage x Fenty lingerie showcase, starring none other than Simu Liu, who is ready for the revealing challenge.