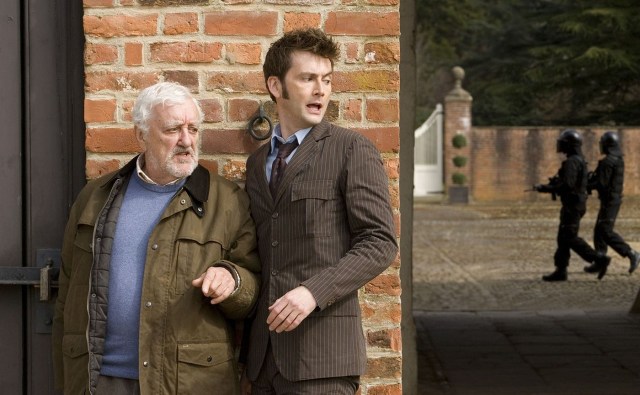 Tragedy struck this week when British acting legend Bernard Cribbins passed away at the age of 93 due to natural causes. The star’s career spans a whopping seven decades, but most recently, he rose to prominence within the online community for his role as Wilfred Mott in BBC’s Doctor Who. Now, fans of the long-running sci-fi series are going through the character’s scenes again and becoming emotionally inconsolable thanks to a very prophetic back and forth between him and David Tennant’s 10th Doctor.

This involves Cribbins’ last appearance as Wilfred in Tennant’s regeneration episode, “The End of Time.” In it, the titular Last of the Time Lords hunts down the Master and reunites with Donna’s grandfather again. The two have a brief catching-up at a cafe, where the 10th explains that his time is near.

The Doctor quickly hits back. “Don’t you dare.” Wilfred grins. “Alright, I’ll try not to.”

“The End of Time” being one of Tennant’s best episodes, a lot of Whovians are going to keep revisiting this episode for years to come, and probably break down crying when they get to this scene.

All is not lost, however. As a final gift of solace, we’ll get to see Bernard Cribbins once more time during next year’s 60th-anniversary special, which also stars David Tennant and Catherine Tate. We don’t know how returning showrunner Russell T. Davies came to the decision to resurrect Wilfred alongside the 10th Doctor and Donna Noble, but Doctor Who fans and the world at large will be forever grateful to him for this final goodbye.

Perhaps simply said, Doctor Who would not have been the same without him.

Rest in peace, Cribbins. You will be missed.