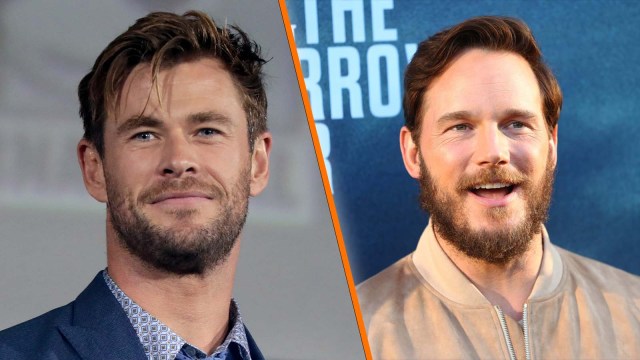 It’s a good day to be a fan of the Hollywood Chrises, which rings true on most days, but with the social media updates from a certain Hemsworth and Pratt — we’re all just basking in the glory.

The Hollywood Chris formerly known as Chris Pratt — who says no one actually calls him Chris — and Thor star Chris Hemsworth both shared shirtless selfies on Instagram in the last 24 hours. Of course, fans took note because, alongside Chris Evans and Chris Pine, the Chrises are a bit of a unit now.

The shirtless posts begin here in what might have started with a mass text sent from the very phone he’s holding.

Pratt’s shirtless selfie is up first. He shared a clever caption alongside his picture — a simple, “lookin cut,” which is true in the literal and metaphorical sense. Pratt sports a wound in the image, just above a well-toned chest and abdomen. Well played, Pratt, well played.

Chris Hemsworth also shared a striking set of shirtless photos, and he shared that even the Hollywood Chrises aren’t above the problem we all have of not knowing what to do with our hands in a picture. How should you stand, where do your hands go, and why is it so difficult??

Luckily for fans, he did share three different poses with options on what one could do with their hands in a photo. We’re eternally grateful for his contribution to the cause.

While that’s only two of four Chrises, those are odds we are willing to celebrate!

Evans did share an Instagram post within the last 24 hours, and while he wasn’t shirtless, his muscles nearly jumped out of the picture, so it’s a nice consolation prize for fans. Maybe he got the “shirtless selfie” text late; we’ll be keeping our eyes peeled.

Regrettably, Pine doesn’t have social media — so we won’t get a shirtless selfie from him today, but we did some digging and provided one for you. You can call it doing the Lord’s work.

As always, if another Chris decides to join in on the fun, we’ve got you covered! Until then, here’s to the Hollywood Chrises!