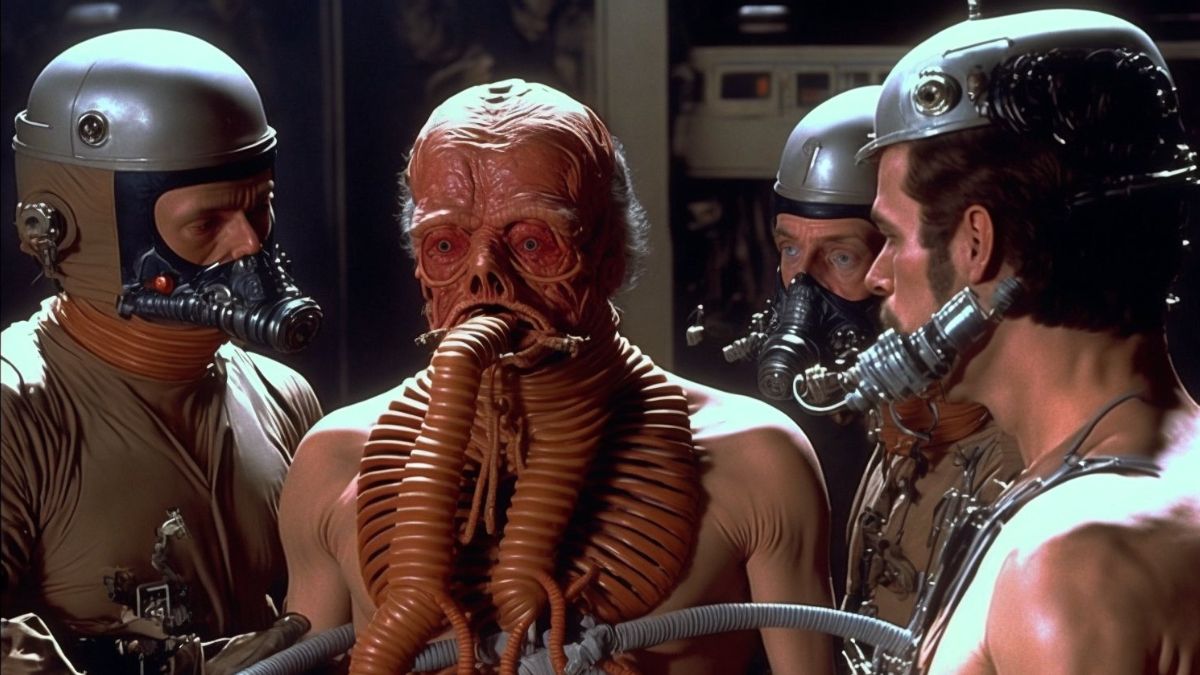 Thanks to the marvels (or horrors) of the increasingly digital world, the world has seen a “first peek” at a David Cronenberg project which never came to be: Galaxy of Flesh.

Cronenberg who was instrumental in body horror becoming a legitimate — albeit provocative — subgenre of horror has been cited in the past as a master of horror. Directing over twenty films, his vision is something he has refused to compromise on. So it may come as a slight shock that there’s a Cronenberg movie nobody has ever seen.

Uploaded onto Twitter by Kevin Schofield, the internet is aghast with the stills from the never released film from the mind behind Videodrome and Scanners. Showcasing the type of intriguing body horror Cronenberg is associated with, it presents an opportunity for straight sci-fi Cronenberg never really delved into.

There’s one very big issue though. This film doesn’t exist, was never a project by Cronenberg, and the images shown in Schofield’s tweet were all generated by artificial intelligence. No, there is no such film called Galaxy of Flesh. Cronenberg has never had a project by the name.

Schofield’s use of A.I. to try and generate (and arguably intentionally mislead) images of apparent lost works of directors has caused an uproar. The music video director has not just done this for Cronenberg, but other creatives such as Michel Gondry, Andrew Lloyd Webber, and Luis Buñuel.

The reaction has not been positive. A.I.’s place in the discussion of art has been a heated one, with the general consensus being it exploits human artists, as well as detaches the humanity required to create art. Add on top of this the almost fake news layer surrounding Schofield’s tweets, and you’ve got a big issue.

A.I. learns (and steals) visions of human creators in the eyes of many. With a tin-foil hat on, it can be seen as the attempt by corporations and billionaires to remove the need for human artists, and stop any chance of real human emotion and rebellion in art. The most aggressively negative thing you could say about A.I. art is it isn’t art. It has no place in the discussion.

Not just no place, but it actively seeks to undermine art and artists who historically struggle to make money from their life’s work.

Schofield using Cronenberg for his tweet also symbolizes a completely misunderstanding of Cronenberg’s works. His works advocate for a new understanding of the human condition, exploring the idea the human body is evolving in ways which seem confronting at first. Not just that, his work analyzes the place technology and governance actually has in controlling humanity.

Artificial intelligence created art feels exactly like what Cronenberg would use for an example of dystopia in a film like Crimes of the Future.