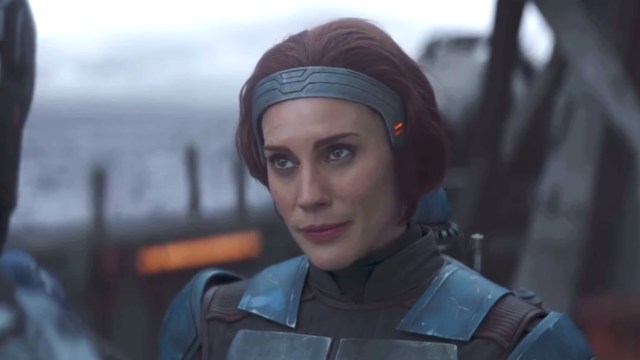 When Moff Gideon’s Dark Troopers abducted Grogu in the second season of The Mandalorian, the protagonist quickly got to work and assembled a crew to take the fight to the Imperial loyalists. Among these elite warriors were a group of Mandalorians from The Clone Wars, not to mention the legendary Boba Fett.

Indeed, the live-action version of Bo-Katan once again appeared in the season 2 finale of Jon Favreau’s show. The former rebel leader begrudgingly decides to help Din Djarin on the condition that she retrieves the Darksaber from Gideon, which would give her an irrefutable claim to the throne of Mandalore. But before they could reach an agreement, she and Boba got into a heated argument that essentially became an all-out brawl.

After all, even if Bo-Katan somehow managed to remain ignorant of Fett’s activities as an infamous assassin during the reign of the Empire, she wouldn’t have been able to forget his peculiar voice, the same as every clone she encountered during the final years of the Galactic Republic. The mercenary returned the courtesy, of course, taunting her with the word “princess.” But what did he actually mean by that?

Well, during the days of the Clone Wars, Satine Kryze, Bo-Katan’s sister, ruled over Mandalore. But after a splinter terrorist group called the Death Watch usurped the Crown and killed Satine, her sister fought back to reclaim their title. In fact, when the Republic threw Maul out with the help of Ahsoka Tano, Bo-Katan essentially became the Regent of Mandalore. Though with the rise of the Galactic Empire, the warrior refused to submit to the rule of Palpatine. It was actually during this period when the Imperial legions seized control of the planet and a lot of the Mandalorian tribes went into hiding.

The Mandalorian, meanwhile, reveals that Bo-Katan has been fighting ever since to reunite her people to no avail, hence the reason Fett mocks her long-forgotten title and inheritance. Now that Din Djarin is in possession of the Darksaber, though, the two of them might clash over who gets to lead Mandalore into a new era of hope, a theme that we suspect will be a major focus for the show from here on out.