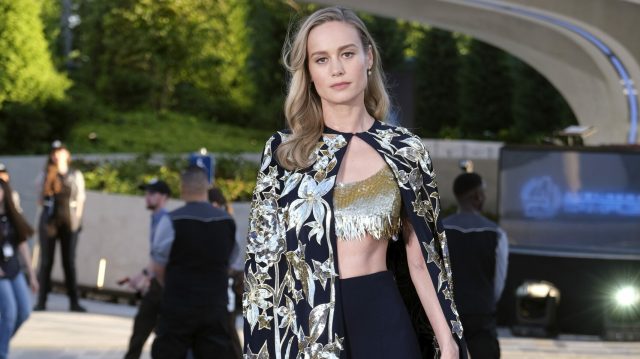 Brie Larson is the MCU’s Captain Marvel, and she owns the mantle with grace, gratitude, and a glamorous style that captures fan attention.

Her physique is next level, and with good reason — she works hard to keep her body in great shape. From bikini snaps to red carpet events, Larson showcases her toned body on social media, and today’s snapshot was also a show of thanks to Disney and Marvel for making a dream come true.

When Brie Larson took on the role of Captain Marvel, she became a hero to fans worldwide — lighting the way for fans of all ages and circumstances who looked up to the character in the comic book realm. Larson is a hero, someone looked up to and adored, and in an emotional caption today, she shared that same sentiment with the Disney umbrella.

Larson has been a fan of Disney since she was a child, sharing that she spent some of her most memorable moments in the parks. She grew up in them, living and dreaming, soaking in all of Disney’s joy. Today, she took a memorable trip to a Disney park thanks to her role as Captain Marvel — and it’s all very full circle.

In a ceremony to open Avengers Campus at Disneyland Paris, Larson was joined by friends and family in what she calls a surreal moment. Being a fan of the Avengers feels like a badge of honor in itself. Actually being a Marvel superhero must be an indescribable feeling — one Larson isn’t taking for granted.

She thanked her mom for telling her stories of Walt and how often people judged his dreams, and for encouraging her after she lost jobs on her way to living her dreams. She thanked those at Disney for helping to create a sense of magic every day, and gave a special shout to Marvel for allowing her to become Captain Marvel.

Of course, she did it all while looking like a million bucks. Larson looked absolutely flawless in a cape that flowed as she walked, donned in sparkle and magic. Her cropped top and high waist shorts still showed off her toned abs — and she had a look of gratitude, glamour, and sheer joy. Larson is living her dream come true, and she deserves it. Plus, she looks like a total Disney princess, doesn’t she? Maybe that can be her next role!

You can watch Captain Marvel streaming on Disney Plus, and if you’re planning a visit to Disneyland Paris, don’t forget to check out the Avengers Campus.