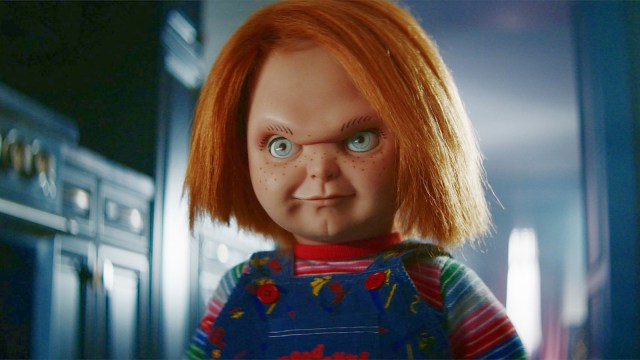 It’s a doll-eat-doll world, and all bets are off as new social media interactions prove that spooky season is second to snarky season this October. Chucky, everyone’s favorite OG plaything, is mincing words with the up-and-coming new favorite, M3GAN.

Horror fans know that Chucky has been around the block a time or two, as he first hit the scary movie scene in 1988, but M3GAN is ready to fight for the top spot in haunted doll stardom, and she’s not too concerned with Chucky’s feelings about the matter.

Chucky began taunting M3GAN on Twitter with a series of Tweets showing his lack of appreciation for her existence in the horror realm; there’s only room for one eerie doll as far as he’s concerned.

Chucky is also gearing up for a fight against his new arch-nemesis, and the first punch is a before and after photo set with M3GAN as the “before” and Chucky as the “after.” It wasn’t just any picture of him, either. It was a snap of his face burnt half off. Still, he thinks he’s a better doll than her any day.

You were sorely mistaken if you thought he would give it up after that one. He’s also challenging M3GAN to a dance-off, and he’s not expecting her to be able to nail his moves.

M3GAN wasn’t going to take the taunting Tweets lying down, and she served some of Chucky’s medicine right back to him as she called herself “that doll’ because she riled Chucky up. Move over Real Housewives! The best drama coming out of the entertainment realm right now is between haunted dolls!

When Chucky offered a “word to the wise,” M3GAN laughed it off, further throwing an axe at the terrorizing doll’s ego.

The pair even brought the infamous Blink-182 into the conversation as they quoted lyrics from their hit song, “I Miss You, ” amid their argument. We have to say; the timing is impeccable.

If you think we’ve turned on notifications from both accounts, well — you’re right. These interactions are the horror doll conversations we never knew we needed, and we’re invested now. We’ve not yet discovered M3GAN’s full potential, but once we do, we know Chucky will be right there to take her down a notch (or several).

You can watch new episodes of Chucky this spooky season on SYFY and be on the lookout for M3GAN when her self-titled movie hits theaters in January.