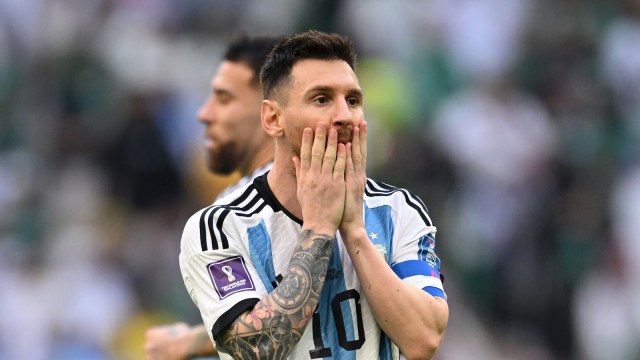 Argentina was expected to easily defeat Saudi Arabia in their opening match of the World Cup and, in fact, the question wasn’t even if they would win but rather how much big the win would be. However, despite coming out of halftime with a 1-0 lead, Argentina watched their opponents score two goals in five minutes and somehow hold on in dramatic fashion to win the match, resulting in one of the greatest upsets in World Cup history.

Meanwhile, Argentinians were shocked and angered. Their national team hadn’t lost in three years and they were one win away from tying the record for the longest undefeated streak on the national stage, held by Italy. Argentina was expected by many to win it all and now they find themselves in a situation where if they lose to Mexico on Saturday then they will be mathematically eliminated from any chance to advance to the second round.

Diego Maradona Jr. went on Radio Marte to express his frustrations. “I’m devastated by this defeat. I can hardly believe this really happened. Losing to Saudi Arabia is mental.”

Maradona J. then decided to take issues with the constant comparisons that fans and media make between his father and Lionel Messi. During their respective careers, both were considered by many to be the best player in the world at one point, both captained the Argentina national team, and both have been called amongst the best players in the sport’s history.

However, Maradona Jr. stated, “People who compare Messi and my father don’t understand football. We are talking about two different planets.”

To his defense, Maradona Jr. went on to say, “I don’t want to immediately throw the cross at Lionel.”

The biggest difference between Diego Maradona and Lionel Messi is that Maradona won the World Cup when, in 1986, he made some of the greatest individual plays in the tournament’s storied history and, by the Hand of God, helped lift Argentina to the cup. However, it’s worth noting that Argentina had also won the cup just two tournaments earlier, as the host nation in 1978, and without the football/soccer legend

Maradona then experienced exactly what happened to Messi yesterday.

Argentina opened the 1990 World Cup by being victims of arguably the greatest upset in the tournament’s history when they fell 1-0 to Cameroon. Unlike Saudi Arabia, who actually has been to the second round of the World Cup before, in what was their first appearance in the tournament in the USA in 1994, Cameroon was in just their second ever World Cup and their historic win over Argentina was their first ever World Cup victory. Francois Omam-Biyik’s header was the only goal and, unlike Messi who scored yesterday, Maradona didn’t score at all and was actually denied a goal for the whole tournament. It’s something that Lionel Messi also experienced in 2010 at the World Cup in South Africa when coached by, ironically, Diego Maradona.

The good news for Argentina is that they recovered after their 1990 upset loss and went all the way to the final, though they lost that final to West Germany. The other good news from the past is what happened to Spain in 2010 when they lost their opening match then went on to win the whole thing, earning their first-ever World Cup Trophy.

Diego Maradona Jr. ended his rant with a reasonable thought, saying about the Argentinian team, “They were scared. Football is like that. Sometimes it happens that you lose even against much weaker opponents.”