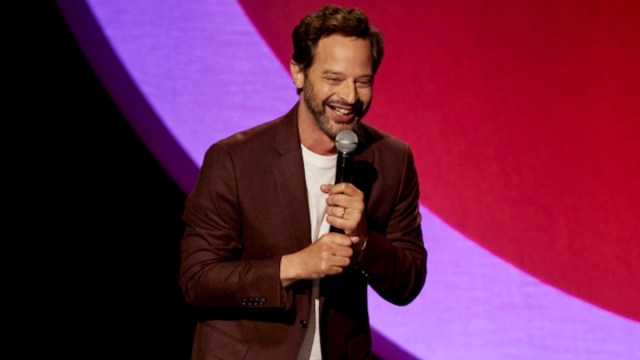 Is there anyone funnier than Nick Kroll? Certainly not on set of the nearly disastrous Don’t Worry, Darling major motion picture that perfected promotion through controversies, rumors, and spitgates.

Such controversies were not simply born out of thin air. They were masterminded by one Nick Kroll, a marketing genius who doubles as an actor and comedian (or would that mean he triples as a comedian?).

Kroll, appearing on The Tonight Show with Jimmy Fallon on Monday night, had almost as much fun as we did with all the rumors, sarcastically claiming, “I decided, let’s create a lot of buzz around the film but not about the film itself.”

Jimmy Fallon, recognizing Kroll’s greatness called him a genius, to which Kroll responded, “I’m the puppeteer.”

He goes on to explain, “I was like ‘Hey, Harry, you know what would be a great idea? When you walk into the premiere in Venice, spit on Chris Pine.”

Clearly we now know the truth. Or do we? Kroll immediately threw a curveball when he explained that even though Harry initially agreed to spit on his fellow co-star, he changed his mind. So, now we have to safely assume that Styles did not spit on Chris Pine. Though we really need to start blaming Kroll for all the crazy happenings on set of the film.

The comedian did take a moment, albeit a brief one, to explain the film by saying, “It feels like a Utopian community in the late 50’s, early 60’s….but things aren’t exactly as they seem.”

Backing up his vagueness about the film, Kroll stated, “It’s a thriller and the less you know about the movie going in, the better.”

Despite poor reviews, the film made over $30 million at the box office this weekend, obviously thanks to Kroll’s marketing talents.

The film stars Florence Pugh, Harry Styles, Chris Pine and director/producer Olivia Wilde. Kroll made it clear that he was the star of the film, however. A claim that we are now inclined to agree with.