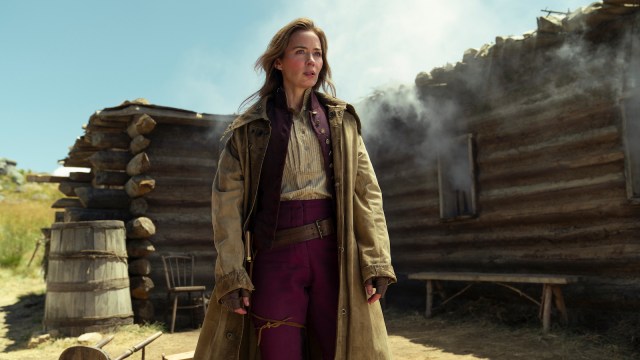 Prime Video and the BBC have released their first look at the upcoming Old West period drama, The English, featuring Emily Blunt, Chaske Spencer, written and directed by The Honourable Woman‘s Hugo Blick.

Blunt will portray an aristocratic Englishwoman, Lady Cornelia Locke, who joins Pawnee ex-U.S. Army scout Eli Whipp “in 1890 mid-America to cross a violent landscape built on dreams and blood,” according to Prime Video’s press release. Though the two are working toward the same ends, neither realizes that they each share a common past.

“They must face increasingly terrifying obstacles that will test them to their cores, physically and psychologically,” the press release continues. “But as each obstacle is overcome it draws them closer to their ultimate destination, the new town of Hoxem, Wyoming.”

The show also stars Stephen Rea, who previously worked with Blick on The Honourable Woman, as Sheriff Robert Marshall, and The Kingsman‘s Valerie Pachner as Martha Myers, both of whom investigate a series of unsolved murderers that seem to hold the key to Locke and Whipp’s mutual past. Other cast members include Rafe Spall, Victoria‘s Tom Hughes, and character actors Toby Jones, and Ciarán Hinds.

Blick, who created, wrote, and directed the series, will also serve as an executive producer. Colin Wratten also serves as a producer on The English, as will The Honourable Woman‘s Greg Brenman. The series is produced by Wolf Gait Productions Ltd, a joint venture between Drama Republic Ltd, a Mediawan company, and Eight Rooks Ltd.