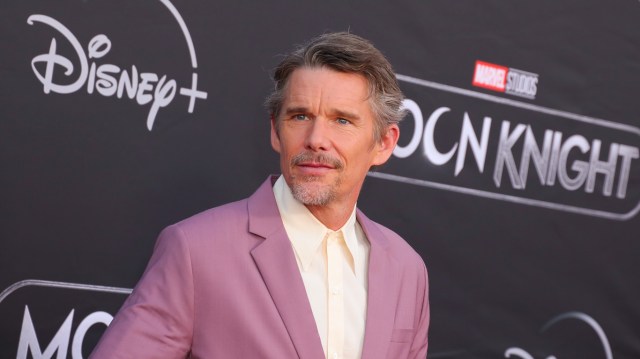 Actor Brad Pitt recently said he is on the last leg of his career, and now Ethan Hawke has become the latest handsome Hollywood man to say the same. In a new interview, the acclaimed entertainer admits he only has a few movies left he can ultimately make.

“I’ve definitely made the turn from being an old young person to being a young old person. I prefer this. I feel like playing John Brown in The Good Lord Bird was that for me: the beginning of my ‘old man’ career, the beginning of my last act. But it’s the beginning of it, you know? I definitely find myself looking over a filmography and thinking about which ones I could’ve cut out because I only have so much time left. I know I only have so many movies left. You have an awareness of time. When I was younger, I was like, ‘I’ll do this, I’ll do that, that’ll be a good learning experience, and then I’ll try this,’ thinking I had all the time in the world. Now, I’m like, ‘I didn’t learn anything from that one or that one, and that one would’ve been better spent in three months with my family.'”

The 51-year-old gives the above reflection in an article published by IndieWire today. In the report, Hawke says he kept working to get through a divorce and, while he became known at a young age, in order to avoid being typecast he says he had to keep stepping up in order to break through, and that before his work on Training Day, he missed out on an iconic Steven Spielberg war production.

“I couldn’t get a f*cking job because I was the Gen-X poster boy and everyone thought they knew me. I was supposed to be washed out to sea with that fad. I remember I wanted to get an audition for Saving Private Ryan and I couldn’t fucking get it. Everyone knew who I was and they didn’t want me. I’m sure if you talk to Matt Dillon or DiCaprio — anybody who’s had young success — they’ll acknowledge that you hit these walls where people think they’ve figured you out and then they’re done with you. You have to be willing to be humble enough to keep getting up to the plate.”

Hawke’s latest project to be released is The Black Phone. His upcoming work includes Raymond and Ray, and Batwheels.