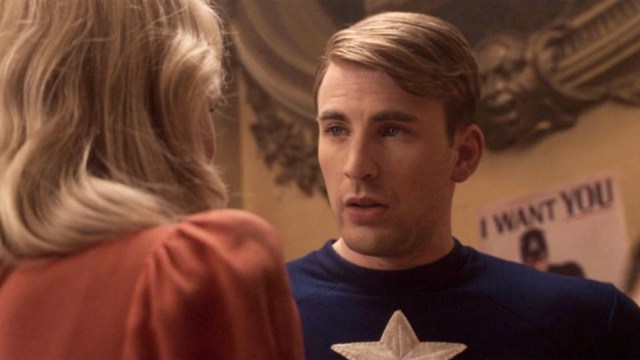 Marvel fans are taking a renewed interest in 2011’s Captain America: The First Avenger after a new revelation about the character of Chris Evans’ Steve Rogers, AKA Captain America, came to light in the first episode of the Disney Plus show She-Hulk: Attorney at Law.

In the show, Tatiana Maslany’s Jennifer Walters, AKA She-Hulk, discusses the sex-life — or lack thereof — of Steve. Since Jennifer’s cousin, Mark Ruffalo’s Bruce Banner, AKA Hulk, was friends with Steve, she grills him about whether Steve was a virgin. Though Bruce hesitates to give a definitive answer, Jennifer eventually draws a response out of him when she pretends to be drunk and lets Bruce knock back several alcoholic beverages on his own.

With Bruce’s inhibitions lowered, he finally reveals to Jennifer that Steve did turn in his V-card, back in the day, saying,

After one Reddit user went back and watched the first Captain America film, they realized early scenes in the film with Steve putting on a propagandistic USO show for the troops really have a renewed meaning now that we know a little bit more about his personal life during that period — especially considering the large number of backup dancers who are part of the theatrics.

Steve had a bit of a whirlwind existence during WWII, making many question whether he actually had time to attend to his personal life. He went from being a pure-hearted weakling to a super-powered war hero, and suddenly, frozen in ice for 70 years. Steve famously missed that coveted first date with Hayley Atwell’s Peggy Carter during his lifetime but eventually traveled back in time to live out a full life with Peggy at the end of Avengers: Endgame.

Catch the first episode of She-Hulk: Attorney at Law on Disney Plus now and its second episode arriving on the streaming service on August 25.