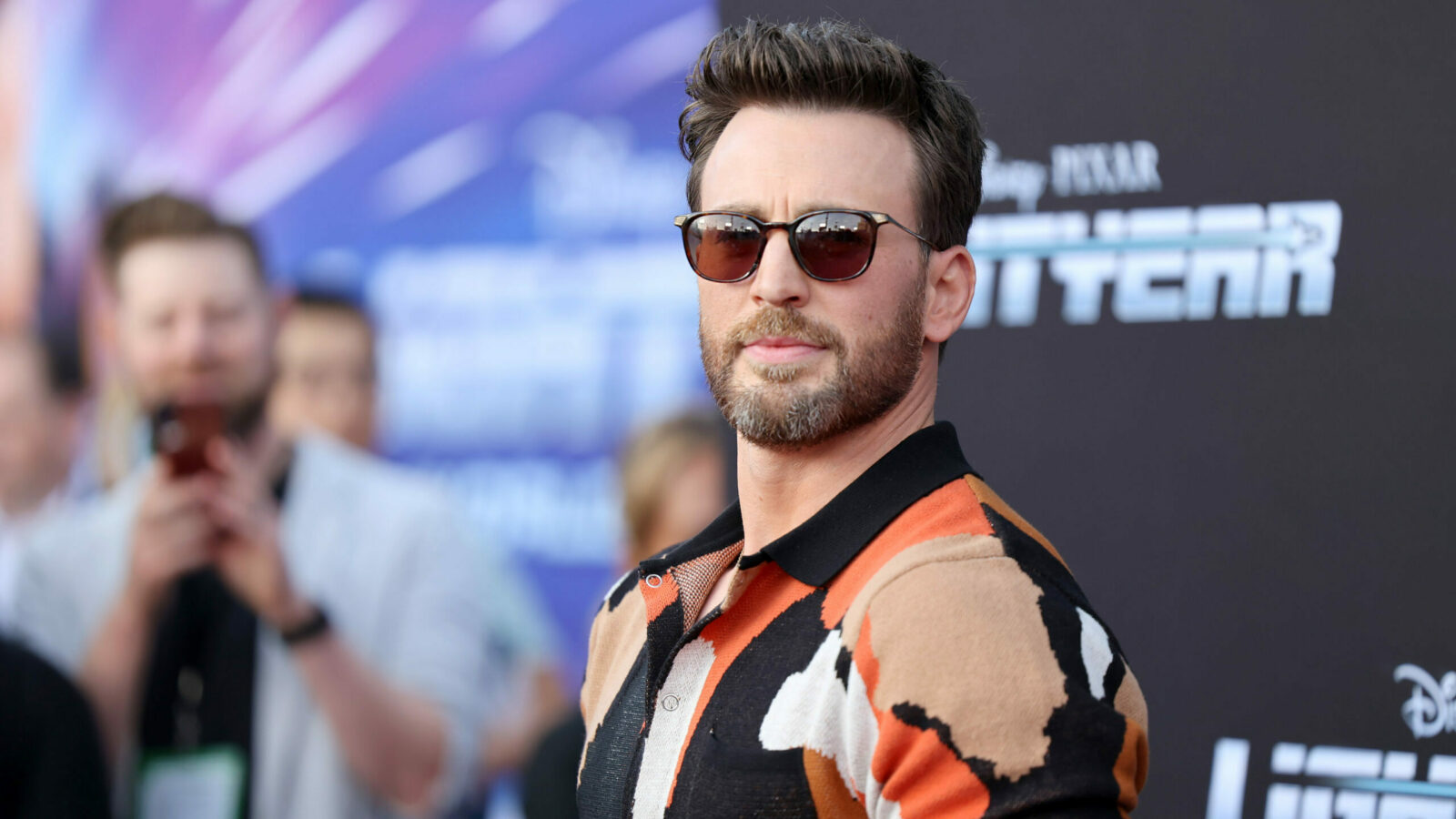 If you’re leaning into a Boston accent or wearing your best star-spangled attire today, odds are you’re a fan of Chris Evans. June 13th may be an average day to some, but for others, it marks a birthday that feels a bit more like a holiday or a national celebration.

Chris Evans turns 41 years young today, and he’s got a lot to celebrate this year. In just a few days, fans will pile into theaters to see Lightyear, with Evans voicing the titular character who just so happens to be the heroic inspiration for the Toy Story favorite. Next month, fans will see him as Lloyd Hansen in the upcoming thriller, The Gray Man, and he’ll also be starring in the forthcoming Apple TV Plus romantic comedy, Ghosted.

To say Evans has a lot on his plate is an understatement. After stepping away from the shield as Captain America, he wanted to do something different with his career. Evans has been jumping into opportunities that best serve him and his path in the entertainment realm.

Of course, he’s also played some iconic characters already, and as we celebrate the man, the myth, and the legend on his birthday, we’re taking a look back at some of Evans’ most unforgettable roles.

First and foremost, the role that requires no running of lines or scripts at all – the part of being Dodger’s dad. Chris Evans rescued his pup Dodger in 2015, and the two have been inseparable ever since. He often speaks about saving animals and the incredible bond he shares with his best pal.

Evans said he had no intention of adopting a dog that day, but the moment they met changed everything. He immediately knew that Dodger (Benny, at the time) would be coming home with him. The peeks into life with Evans and Dodger are a favorite of fans; they’re truly living their best lives.

A role he will continue playing for years to come, Evans shines as a dog dad.

Warming our hearts in a role unlike his others, Evans played Frank Alder with the care and compassion that made Gifted a standout film for the actor. Alder took on a fatherly role for his niece, Mary, after the untimely death of his sister, and it wasn’t a mantle he thought he’d be taking on, but it was one he excelled at – even when he didn’t. Being a parent is hard; it’s not an easy walk, even when it’s something you have time to prepare for.

Alder loved his niece enough to do his best, accept his shortcomings, and want a better life for her. He made sacrifices for her and thought enough about Mary to know that while many focus on her brilliance, it’s crucial for her to embrace her childhood. Evans truly shines as Alder, and it’s his own compassion that stands out.

An incredibly snarky Ransom Drysdale was a hell of a role for Evans, who played the character with poise, sarcasm, and enough vulgarity to last a lifetime – or at least a year or two. Knives Out is a family-style murder mystery with a twist, and Evans plays the grandson of the murdered Harlan.

Ransom thrives off of snark, sass, and a complete disregard for anyone’s feelings but his own – and he does it all in knitted sweaters and scarves. Seeing this side of Evans was a stark difference from his role as Steve Rogers, and it was a welcomed one. He’s talented across several genres, but fans hope to see more of a Ransom-style character in Evans’ future.

Evans took on the role of Mike Weiss in the film Puncture, based on a true story of a lawyer who advocated for nurse health against accidental syringe pricks. When a nurse contracts HIV from a poke, she meets with Weiss and Paul Danzinger to show them a safety needle designed by a friend. The two begin to advocate for these needles to make it into hospitals everywhere, but their fight is a seemingly impossible one.

In addition to the legal struggles, Weiss grows close to the victim, named Vicky, and the two soon find that they have more in common than they initially thought. They’re both struggling with a darkness that they cannot overcome, and it’s enough to risk their lives. Evans is believable as the lawyer as he struggles with drug addiction, loneliness, and an inability to carry the weight on his shoulders.

Though this movie doesn’t have a happy ending, it looks at how difficult it can be to bring change in a field like the medical one. It’s also heartbreaking to see the hold that addiction can have on anyone it touches, even a character as promising as Weiss.

This romantic comedy sees Evans shine as Colin Shea, the neighbor of a young woman trying to decide where she’s gone wrong in her relationships. When she’s given a “statistic” that dooms her hope for future relationships, she stumbles across her handsome and quirky neighbor who seems to have no hangups about relationships at all, especially the physical kind.

When Ally Darling decides to revisit old flames, Shea is there to help her on her journey, but the two soon realize something is sparking between them. Will Darling see Shea as more than the boy next door? With Evans’ performance in this one – it’s hard not to!

In Defending Jacob, we see Evans once again take on the role of a lawyer, but this time it’s a different set of circumstances entirely. Andy Barber is a father whose son is a person of interest in the murder of a classmate, and his entire life is upended. Barber can’t legally act as his son’s lawyer, but the lines of legality blur when his life is on the line.

It’s a grey area for Barber, and Evans plays the role with dignity and heartache as he questions what’s right and what lengths he will go to protect his son. Even as those closest to them question Jacob’s intentions, Barber never does – he loves his son, and that love prevails over anything else.

Chris Evans himself is a massive fan of Disney, and not just because he’s voicing Buzz Lightyear. He’s been a frequent visitor of the parks with his family for years. They bond over and get excited about it together, and Evans’ excitement, particularly, is something fans love.

“I’m a big… I have an inappropriate love of Disney. My family, you know, we love Disney. We do an annual Disney trip around the holidays and then we do this countdown. We have group chats, like, ‘Fourteen days to Disney! Seven days to Disney!’ But, we start these chats in like March. So it’s like, ‘278 days to Disney!’ My family is — we’re diehard fans of Disney. It’s just nice to be a part of the family in any way.”

There’s something magical about Disney and, of course, about Chris Evans, the two mixing together is almost too much for our hearts to handle.

You can’t create a list featuring the “Best of Chris Evans” without including Steve Rogers. The unlikely superhero won our hearts when we first saw him take the stage in Captain America: The First Avenger as he rose from a skinny boy from Brooklyn to America’s hero.

Captain America was the savior everyone needed, but that didn’t come without a healthy amount of resistance. That tied to the fact that he lost his best friend was a heavy burden for Rogers to carry in the first film and a large arc of his storyline throughout the MCU.

Captain America stands for what we all strive for — bravery, triumph, patriotism, and equality — but it wasn’t always an easy journey. Through the Marvel Cinematic Universe, we saw Rogers fall, struggle, and ultimately come to a place where he knew he’d done his best. It was an arc we could have watched forever, but the mantle has been passed on, and Steve Rogers is the kind of legend we’ll always keep close to our hearts.

While this one isn’t in theaters yet, it’s easy to assume that Lightyear will be a memorable role for Evans and for his fans. He loves animated films and Disney (as we shared above), and he’s been so incredibly grateful for his role as the space ranger that inspired the toy in Disney/Pixar’s Toy Story.

A recently shared video to Twitter shows Evans proclaiming Lightyear’s catchphrase, which was enough to bring tears to the eyes of longtime Toy Story fans. We can’t wait to see him in action.

There is no better role than that of Evans simply being himself. If you ask any fan of the icon what they love most about him, it’s a slew of things he does without even trying. His laugh where he grabs the left side of his chest, the Boston accent, how he can laugh at himself for being silly, and how utterly excited he is about life – they’re all easy things to adore about the actor.

There’s also the side of him that’s been honest about anxiety, open about a need for change to better the world, and vulnerable as an actor and a man. Evans can seemingly do it all, and fans love to see it.

Happy Birthday, Chris Evans; today, we all celebrate you.