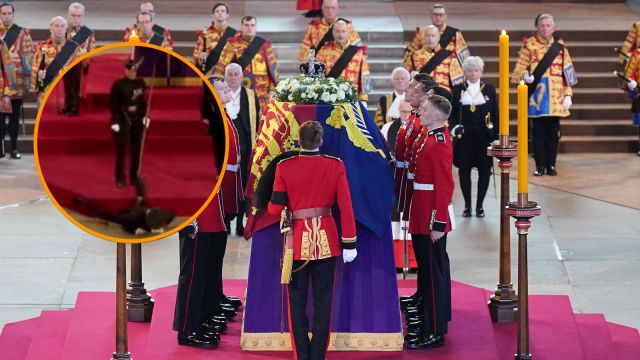 Working for the Royal Family is a tough job, and people are now just witnessing how tough the job can be as guards have been seen fainting whilst on duty as they guard Queen Elizabeth II‘s body.

A clip from the BBC’s live-feed circulated on social media, showing one of the Royal guards fainting at Westminister Hall during the Queen’s lying in state. As the guard fell from one of the low platforms and hit the ground, other members of staff went to the their aid while others remained in their posts.

Before the fall, the guard swayed left and right. Luckily, he was able to step off the platform and have his colleague assist him to regain his balance. But those near incidents were not enough to keep him awake as he eventually collapsed.

According to Express, the fallen guard was assisted by police and paramedics as he was taken away for treatment. This isn’t the only incident where Royal guards fainted while on duty, with People reporting that a guard fainted during a royal event in 2017.

The Queen’s body made its way to Westminster Hall after it was delivered from Balmoral, Scotland, where she passed. The public will be able to pay their respects to the Queen for four days. Afterward, the body will be taken to Westminster Abbey for her state funeral on Sept. 19.

In the wake of the Queen’s passing, interesting tidbits have come out about her somewhat secret passions, from playing Wii to watching Twin Peaks.