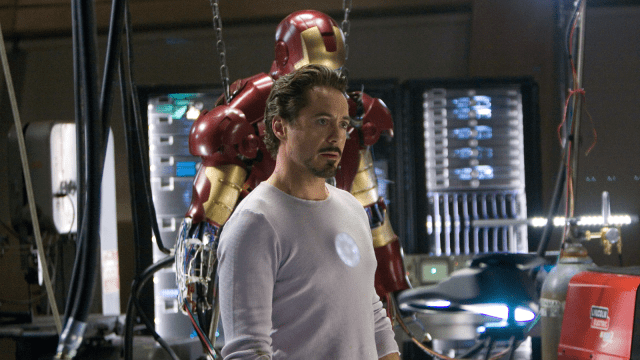 Even three years and counting after his death in Avengers: Endgame, Iron Man’s influence can still be felt on the MCU. And even though his former protégé, Peter Parker, might have become his own hero, another teen prodigy will soon be about to take on the Stark legacy in his stead. Following her debut in this November’s Black Panther: Wakanda Forever, Dominique Thorne is set to star in her very own Disney Plus series, Ironheart.

And the latest snap from filming in Atlanta, Georgia reveals that a major piece of Stark tech — that’s been strangely forgotten in recent years — will make a comeback in Ironheart. As posted by @atlanta_filming on Instagram, the blurry, black and white image captures someone holding a case labelled “BARF TECH.” The OP neglected to specify which project this was from, but that phrase gives the game away for Marvel fans.

Binary Augmented Retro-Framing — aka B.A.R.F — was first introduced in Captain America: Civil War, with Tony using the holographic tech to revisit the memory of the last time he saw his parents. We later discovered in Spider-Man: Far From Home that the tech was originally developed by Quentin Beck, who later used it to terrorize the world as Mysterio. Now that everyone’s seen what it can do, though, it’s no surprise that B.A.R.F. is re-emerging (wait, that sounds gross) in Ironheart. No doubt it’ll be of interest to more nefarious individuals.

Interestingly, though, the main villain of the series is expected to be mystical in nature, not technological. Thorne’s Riri Williams will be facing off against The Hood, a mobster with a super-powered cloak, as played by In the Heights‘ Anthony Ramos. Could a side-plot involve B.A.R.F. tech falling into the wrong hands again? Might Riri’s intervention in its theft be what causes her to come into contact with Stark Industries? A cameo from Jon Favreau as Happy Hogan seems inevitable, right?

Ironheart is blasting onto Disney Plus sometime in fall 2023.