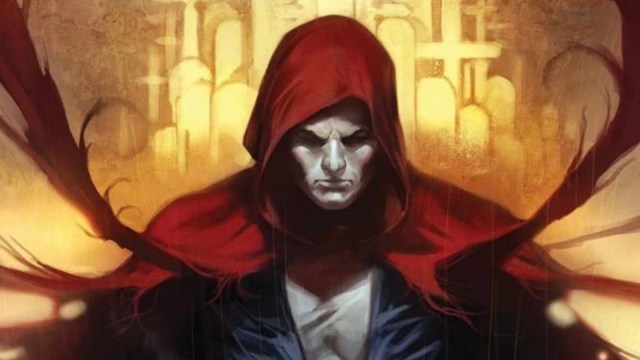 The Hood is the confirmed villain for Marvel’s Ironheart TV series, and it’s a big deal.

The series will star Dominque Thorne as Iron Man’s successor, set to be introduced in the Black Panther sequel, Wakanda Forever. Details about the series are slim, but the girl genius will maintain her comic book origin of creating a suit of armor and becoming a superhero in her own right.

Who is the Hood in Ironheart?

Set photos of Anthony Ramos (Hamilton) revealed the actor as the Hood in a comic-accurate suit and it already has people talking. Created by writer and artist Brian K. Vaughn, Parker Robbins is a New York native who watched a showdown between Daredevil and the villain Electro when he was young. Instead of admiring the hero, he was inspired by the super villain. He and his cousin John King went on to commit crimes together, but Parker wasn’t your typical criminal. He was intelligent and even got accepted into a pre-med program to become a doctor.

His life wasn’t easy, however, as financial issues mounted and complicated matters. After his father died, Parker had to look after his mentally ill mother Eliza, who he had to put in the Bridgeside Psychiatric Center. His girlfriend Sara became pregnant, which put extra strain on Parker, and ultimately pushed him back toward bad decision-making. After taking on a new job with John King, the pair raided a warehouse that was supposedly filled with highly valuable cargo. Instead of finding the expected bounty, however, the duo found items from a strange ritual, with candles surrounding a symbolic circle. Suddenly, a demonic creature named Nisanti attacked them and Parker shot it, seemingly killing it. Not wanting to leave empty-handed, Parker stole the demon’s boots and cloak and John King abandoned him.

Parker left the warehouse and was almost immediately beset by a street gang. The pilfered garments, once donned, enhanced Parker’s abilities, and he soon discovered that the boots gave him the ability to run on air, and the cloak granted invisibility under specific circumstances.

Soon after, another criminal undertaking led Parker and King to a shipment of black market diamonds. These weren’t just any diamonds, however — they belonged to the crime boss Dennis Golembuski, who’s villainous security team consisted of Jack O’ Lantern, the Constrictor, and Electro, Parker’s earlier inspiration.

Despite the daunting collection of bad guys, Parker was able to grab the diamonds with the aid of his mystical garments. It seemed like he had gotten away with it until two police officers surprised him, leading Parker to accidentally shoot them, wounding one and killing the other. Parker, now a target of both the FBI and Golembuski, earned his new name: “the Hood,” based on the one physical attribute police could distinguish.

Parker soon set up a deal with the Golem to give the black diamonds back, but was ultimately double-crossed by the crime boss. A brutal fight between Parker and the Golem’s agents, including Madam Rapier, followed, but ended in blood when Parker tricked the police into believing Madam Rapier was the true Hood. Her death cleared his name, for a time at least, and gave him the leverage he needed to give back the diamonds and walk away. Despite his best efforts, however, this did not mark the end of the Hood’s criminal career.

Over time, the super villain discovered new abilities granted by his mystical attire. Aside from walking on air and invisibility, he found he could also harness electricity, discharge it, and see through illusions. These abilities gave him a huge boost in combat, and helped the Hood become a villain in his own right.

The Hood hasn’t had much interaction with Ironheart in comics, but he has encountered Iron Man before. The potentials for how he’ll fit into the MCU following his Ironheart debut are nearly endless, but it seems likely that he’ll start off as a street-level criminal like his comic book counterpart. Eventually, when he and Riri Williams face off, viewers will have the chance to witness a battle between mysticism and machinery. We can’t wait.