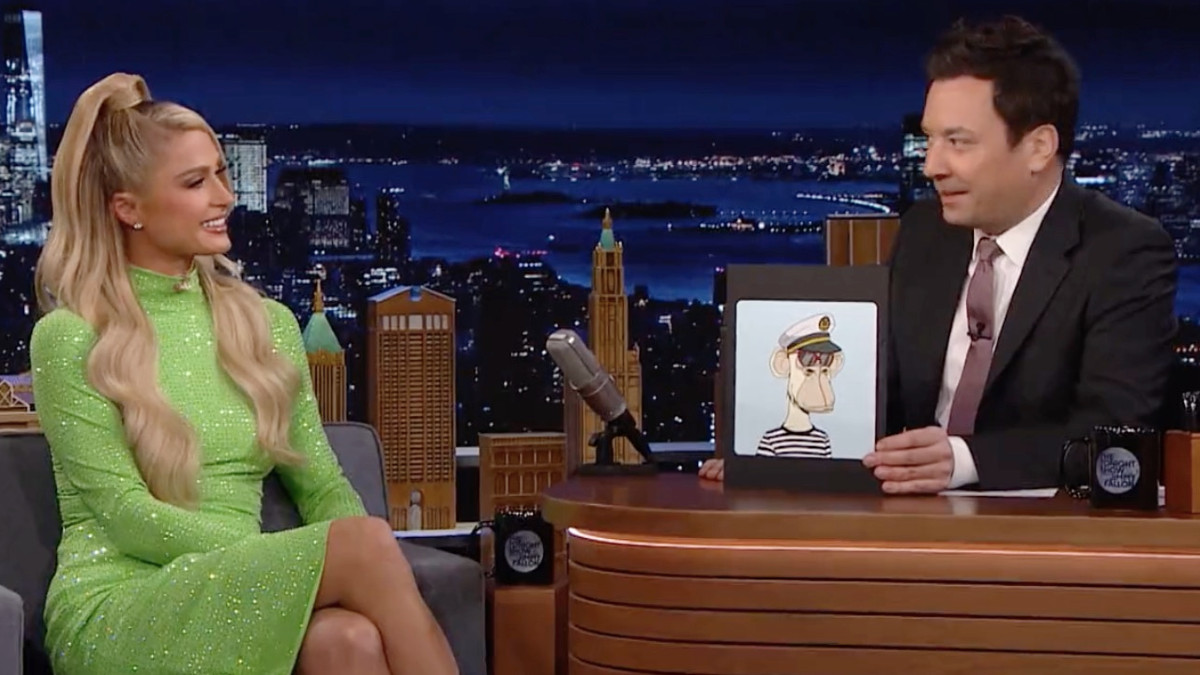 Jimmy Fallon welcomed Paris Hilton as a guest on The Tonight Show earlier this week, where he and the socialite compared NFTs — or nonfungible tokens, if you’re feeling fancy. However, an article published by the Los Angeles Times suggests that the late-night host may have breached conflict of interest policies set by Comcast, the parent company of NBCUniversal, in doing so.

As Fallon explained, Hilton was the one who actually got him into the crypto game. The pair also discussed how they both recently acquired NFTs from the Bored Ape Yacht Club collection — which is comprised of 10,000 avatars of identical cartoon monkeys, each with a defining trait or wardrobe.

As you can see in the clip below, Hilton’s Bored Ape is wearing a black leather cap, while Fallon’s has on a striped shirt, heart-shaped sunglasses, and a peaked nautical cap. Hilton also later gave the entire audience complimentary NFTs from her own personal collection — a first for a talk show.

It’s believed that Fallon likely purchased the image for about $216,000 last November, or rather, as the Times points out, “a record on a digital blockchain ledger saying he owns it.”

However, because NFTs can wildly increase and decrease in value like many types of assets, Fallon may have inadvertently bumped up the value of his investment by hyping it up on the NBC show — a violation of ethics policies that most NBCUniversal employees must adhere to.

A workplace policy set out by Comcast, the parent company of “The Tonight Show” network NBC, asks employees to “not let outside interests or activities interfere with [their] business judgment or responsibilities to the company.”

Another policy within NBCUniversal mandates that all employees “disclose and obtain approval for all outside work, financial interests and other personal activities/relationships that may create or appear to create a conflict.” The same policy says that employees should not “use company info, resources, time, etc. for personal benefit.”

A spokesperson for NBC told the Times that Fallon didn’t violate the company’s conflict of interest policy, on the stipulation that “hosts are able to promote outside projects such as books and movies.”

But while those projects “are creative endeavors that in turn serve to promote NBC’s programming,” an NFT is a completely different beast altogether — no pun intended — since their value is intertwined with virality and influencer culture.

Conflicts of interest notwithstanding, the episode had people scratching their heads when it aired — especially when you consider the risks of average people blowing their savings on what may essentially be a get-rich-quick scheme, factoring in the uncertain future of crypto.

“Dude you should be hiding this embarrassing shit in a vault guarded by dead-eyed sentinels not tweeting it out,” tweeted Max Collins, the singer of the band Eve 6, from his @Eve6 account.

But Fallon’s woes may not end with a potential conflict of interest headache. As Collins also pointed out, the Bored Ape Yacht Club has inherently racist roots and was allegedly started by neo-Nazis.

As the linked article states, the apes are an example of “simianization,” which has been used throughout history as a way of disparaging someone by comparing them to an ape or monkey.

At first glance, the apes in Bored Ape Yacht Club might seem innocent, but there are several traits that indicate that they are intended to represent Black people and Asian people, such as the gold chains trait called “hip hop,” the gold/diamond grills trait or the Kamikaze headband, offensively labeled “sushi chef headband.”

If true, Fallon would not be the first high-profile celeb to accidentally purchase a racist NFT. Last November, Elijah Wood sold a series of nonfungible tokens he owned, after he came out that the artist that had produced them had a problematic history of creating depictions of marginalized people.

“Upon learning this, I immediately sold the NFTs as I wholly denounce any form of racism,” Wood said in a statement, adding that he had donated the proceeds to various charities, including the Black Lives Matter movement.