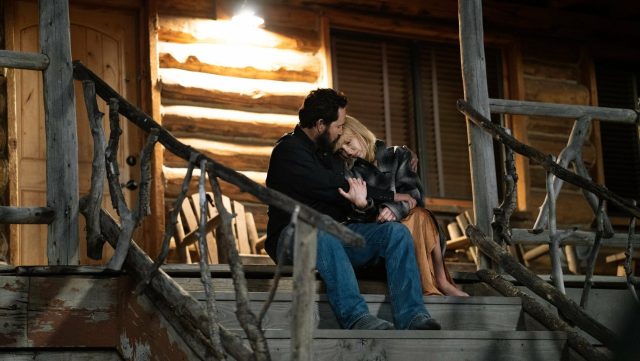 Warning: this article contains spoilers for the season premiere of Yellowstone.

Yellowstone‘s highly anticipated fifth season just premiered to excited audiences worldwide, and fans can’t stop talking about the ups and downs the Dutton family have dealt with within a two-hour timespan. From John Dutton’s swearing-in as governor to the devastating loss the family has already endured, a lot is going on.

Of course, Beth Dutton was no stranger to the episode’s challenges, but she also got a few moments of joy and some sweet time with her husband, Rip Wheeler. Speaking to Deadline as the two-hour television event aired, Kelly Reilly had a lot to say about her character’s journey.

Reilly says the flashbacks between Beth and Rip are important because they give insight into why Beth seems so guarded against her husband and why she feels like she’s not deserving of his love.

“I think, for me, Beth is very haunted by her past and there seems to be a lot of that rising up in her this season, which I’ve actually enjoyed because you get to see a side of Beth that understands consequence. Most of the time she doesn’t. She’s fearless and reckless. But with Rip, I think she understands her behavior. I think she gives herself a very hard time when things come down to the crunch with people she loves. I think she feels things incredibly deeply and feels she wronged him. I think it haunts her.”

She also touched on the fact that Beth is still angry, and rightfully so, but that it’s becoming evident to her that it’s a bit misguided. Of course, Beth still beats herself up as Rip begs her to find someone else for fighting with, noting that she can’t keep being herself. Reilly says that, to an extent, he’s right.

“I think there’s truth to that. I think she doesn’t know any other way. She’s had to fight her whole life and I think that is in her DNA. I don’t think she’s someone who spends too much time in wellness, thinking how can she live peacefully or happily when she’s consumed with her mission to save her father’s ranch. I always ask myself, why does she feel like she has to do this? It feels like some sort of penance that she puts on herself because she took his wife from her. And in that terrible accident, I think she carries a tremendous amount of shame and guilt and responsibility. And so it’s almost like she’s dedicated her life to serving him and making him happy.”

It’s evident in each new episode, in each scene Rip and Beth share, that she’s given herself to making Rip happy. She does it out of love, of course, but she also feels like she’s robbed him of something important — something he needs to be part of this relationship with her.

Rip continues to tell her that he doesn’t need anything but Beth, but she’s yet to believe it. On the other side of that equation is the relationship Beth feels extraordinarily confident in her bond with Jamie.

Reilly was asked about the stare-down between Jamie and Beth as the beginnings of the episode unfolded.

“Yeah, sort of two tigers, isn’t it? I mean, she says to him, ‘You’re in my prison now.’ How Beth and Jamie are in the fold together sort of feels like early days and now they’re both with their father as he becomes governor and Jamie has to play ball in Beth’s world. And she says to him, ‘You will do as he asks you to do.’ And it goes against every fiber in Jamie’s body to do what he’s being asked to do. Is it awful? He is like a prisoner in this family and I think at any opportunity, Beth will remind him of that in her most eloquent way.”

Beth can spit vulgarity with the best of them, but she does have an eloquent way of doing it all, so Reilly knows precisely what she’s talking about when she says it’s all going to be very eloquent when she lays downs the hammer with Jamie.

Of course, she also spoke about her tv dad as he swears in and that he fell silent when he was supposed to swear in, hand on the Bible and all.

“No, not at all. They are both incredibly reluctant to be there. I don’t think either one of them have any interest in this world. However, and it is a big one, Beth understands, as does John, that this is necessary in order to shut down the building of the airport. And the only way that they can enforce real change is for him to become governor. To see John and Beth in this position of power, perhaps squirming in it, it’s not how they play. They’re dirty in the way they do their dealings in business and now they’re having to toe the line a little bit and do things properly. It’s quite fun to see Beth not quite able to manage that.”

A father and daughter who walk confidently and are suddenly reluctant to be there does say a lot in itself. We’ve yet to see the impact of what his swearing-in will mean for the ranch and the family, but things are looking dire as we see it now. Here’s hoping the fight is valiant and the Yellowstone Dutton Ranch stays in one piece.

You can see Yellowstone as it airs new episodes on Paramount on Sunday nights, and it will be a wild ride.