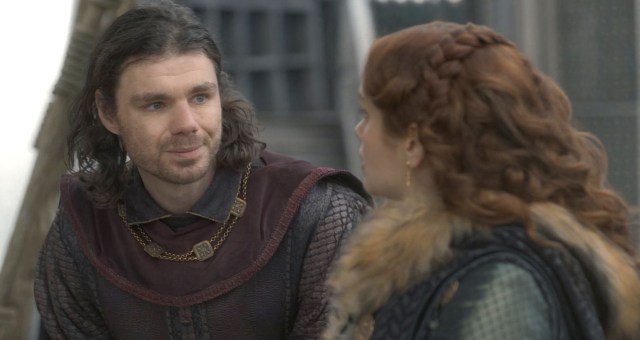 The penultimate House of the Dragon episode finally kickstarted the Dance of Dragons after Aegon Targaryen usurped the throne from his sister, Rhaenyra. As fans recover from the jaw-dropping scene of Rhaenys breaking off the coronation ceremony on top of her dragon, Meleys, and try to put that gross scene between Queen Alicent and Larys Strong behind them, HBO releases the first preview trailer for next week’s season one finale, which teases Rhaenyra and Daemon establishing a war council to prepare for the confrontation with the Greens.

Dragons take flight for their doomful Dance in the finale trailer

House of the Dragon started with the first years of King Viserys’ reign over the Seven Kingdoms, but thanks to numerous time jumps, we’ve essentially gone over decades in a matter of episodes. Now, with Aegon being crowned king in the ninth episode, the stage is set for the Dance of the Dragons — or at the very least its first phase — to take the realm by storm and upend the rule of order. The first trailer for the finale certainly seems to depict the Blacks preparing for war, so there probably isn’t any room for de-escalating this conflict.

Just when you’re about to let your guard down or at least be naive enough to presume Game of Thrones can’t surprise you anymore with its profane scenes, stuff like the relationship between Alicent and Larys pull you back into the grimdark reality of Westeros and reaffirm that there can be no limit to the perverse nature of humanity. What might come off as even more disturbing after watching the episode itself is the realization that some folks are actually searching Olivia Cooke’s feet on the internet. Strange times to be alive. Strange times, indeed.

The Queen Who Never Was finally got her moment in the sun during “The Green Council” by riding Meleys into the great sept just as Aegon was crowned king. As much of a badass as that scene makes Rhaenys, we can’t help but wonder why she didn’t just “dracarys” the whole bunch of the Hightowers and finish the succession war before it even had a chance to begin. That’s all it would take, just one whisper. According to director Clare Kilner, Rhaenys couldn’t look another mother in the eye and kill her entire family in front of her eyes.

“I also feel like that moment, she looks Alicent in the eye and Alicent walks in front of her kid to shield him,” she said. “It’s one mother to another. Rhaenys is angry, but in her previous scene with Alicent, she respected her, even if she doesn’t agree with her. So she’s not going to kill another woman like that.”