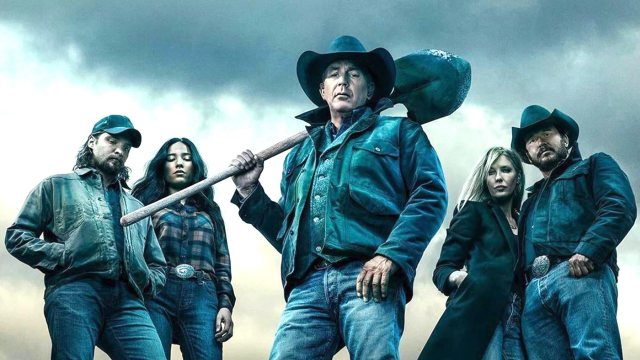 Today is the day, Yellowstone-lovers; the trailer for season 5 officially premiered, and it’s all we’ve been thinking about since this morning. Our normal Pumpkin-spice fueled spooky season thoughts have been taken over by all things Yellowstone Dutton Ranch. The look at the upcoming season previews several changes for the family we’ve grown to love, and they’re not all good ones. Yes, John Dutton is stepping into a position of power and roping in someone close to him to help, but the target on his back seems to grow daily. With exciting changes previewed in the trailer and some romantic moments that’ll make your heart skip a beat: today’s news cycle is all about looking forward.

So please, take a seat, relax with your favorite drink, ad let’s ride into the Yellowstone Dutton Ranch.

The trailer for the highly-anticipated 5th season is here, and the look at the Dutton future is both exciting and unnerving. John Dutton is taking the rank of Governor while Beth and Rip adjust to married life. Kayce and Monica have a lot to work through after his season 4 vision quest, and she’s still not certain where she stands with the Dutton family. Keeping a safe distance is the best way she knows how to survive, but it’s still not an easy road.

The trailer also shows a sneak peek at several attacks that will take place at the ranch, and it looks like things at the train station are heating up. We saw black trash bags being throw into a furnace, all-out brawls between our favorite ranch hands and the Dutton’s biggest enemies, and cowboys riding out to fight the evil that threatens the ranch. What exactly are they up against? We’ve yet to discover that, but it’s a high-stakes game. In fact, the stakes have never been as high as they are now. With all the power in the world, they’ve got a lot to lose.

Don’t forget, showrunner Taylor Sheridan also told fans to expect that season 5 will look like a chess board with our favorite places being the pieces. How will they move to stay alive? One thing that we know for sure is that they’ll need to lean on each other; the Dutton family has to pull their strength from within and set their differences aside so they can flourish.

From romance to life-or-death situations, there’s a lot on the menu in season 5, and we can’t wait to dig in.

So what kind of challenges is John going to face as Governor of Montana? Well, the list seems endless at this point. As he says in the trailer, he loves Montana — but he’s doing this for his family. He didn’t run for governor for the reasons one might hope; he ran because it was the only way he knew how to save his family. He had to be the one in office, he had to be pulling the strings, and he had to hold power.

As we all know, with great power comes great responsibility, and John has more of both in his palms than he’s ever held before. Like we’ve said all afternoon, that target on his back is getting bigger by the second. The weight on his shoulders is also getting heavier, and it will take everyone on the ranch to help him shoulder it.

The Dutton’s biggest headache, Market Equities, is run by a pretty vile woman, and the trailer also sees a lot of upset for her. If there’s something we’ve learned through watching the series, it’s that enemies of the Duttons don’t prosper for long, and we can’t wait to see the fall of Ms. Caroline Warner. Especially after her significant threat to take down Beth Dutton, we know she won’t be around for too long, and if she is — it won’t be pretty.

John is also going to have to face Chief Rainwater, and while the two have been living under a truce, they still need to have a conversation between themselves. They want similar things, but they want those things for very different reasons. They’ve realized that they work better as teammates rather than enemies, but John’s new position gives him a lot of power.

Will Chief Rainwater expect more from John now? Will he want a higher payout for his partnership? At the end of season 4, he told John if they wanted to go to war with Market Equities, he’d help hire the team. Could that be part of their big discussion, trying to figure out what steps to take next? Whatever it is, you can tell it’s loaded full of emotion, and for an already intense series, the preview shows that we’ve not seen anything yet.

If you can’t get enough Yellowstone, and we can’t blame you, they’re expanding with a phenomenal newsletter for all you die-hards out there. To sign up for the newsletter, check Yellowstone’s Twitter and Instagram accounts today; they’ve shared a link for you.

You’ll give them a bit of your information and confirm via an emailed link; within an hour or two, you should receive your first newsletter directly into your inbox!

The newsletter will give fans sneak peeks into Yellowstone, messages from the cast and crew, and some insight into episodes we love and the ones we cry about. Jen Landon, who plays Teeter, is seen in an exclusive image in the middle of the newsletter, and we can’t wait to see what’s next for her! After a rough go during season 4, we hope she has some moments of sheer bliss in season 5; she deserves them!

Here’s to Teeter, Yellowstone drama, and all of the excitement and tears barreling towards the Duttons. It’s going to get intense. You can watch the first four seasons of Yellowstone on Peacock now while you wait for season 5 to kick off with a two-hour television event on Nov. 13.