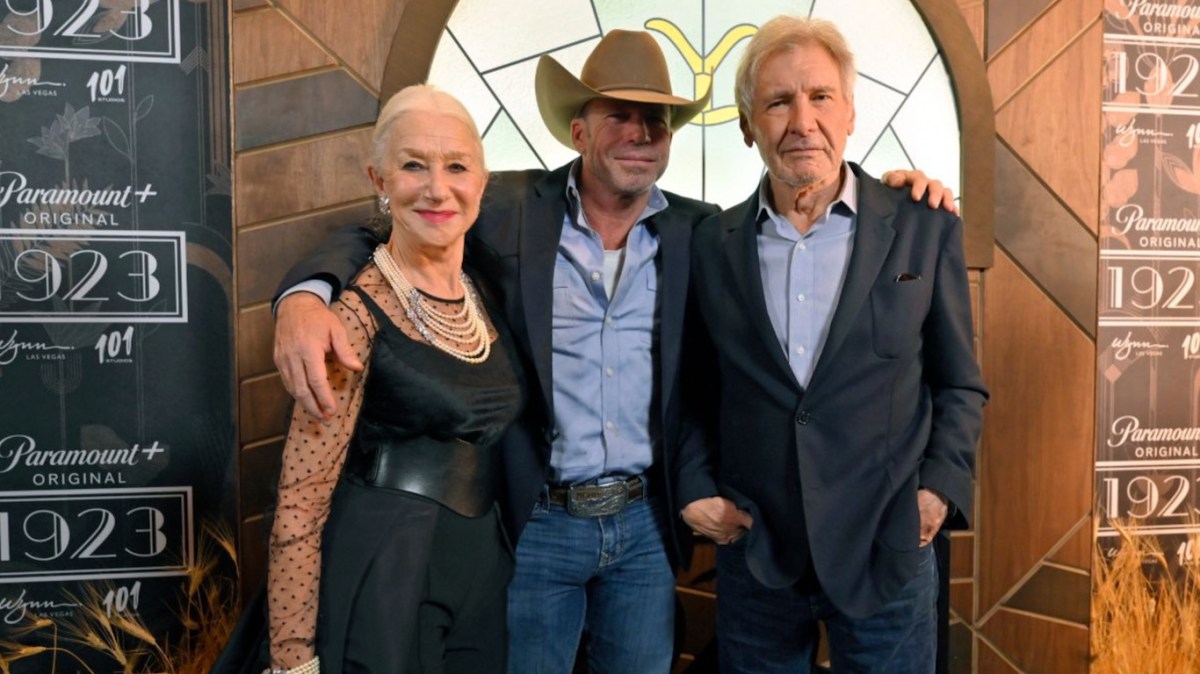 Happy Christmas Eve-Eve, Yellowstone fans; while you’re traveling to visit loved ones or keeping warm in your house amid below-freezing temperatures and iced-over roads, we’re glad you’re with us today. The holiday season is full of togetherness, love, and family, which also rings true to the Dutton’s story.

Okay, maybe their story is a little less cheery, but the sentiment remains: it’s all about family where they’re concerned and protecting their name. A name can mean a lot to a person, and for 1923‘s Helen Mirren and Harrison Ford, it meant being drawn to the Yellowstone prequel. Speaking of Yellowstone prequels, Taylor Sheridan also discusses which character’s fate was almost changed for the sake of a second season of 1883. There’s a lot to unpack in the Dutton realm today, and you know what that means: grab your Yellowstone-loving bestie and your Christmas gifts because we’re riding in.

Taylor Sheridan is the showrunner and brilliance behind everything in the Yellowstone Cinematic Universe so far; that’s right, the YCU is growing by the day, and with each prequel or spinoff of the Dutton family story, more is uncovered about the lives of those who have set out to protect the ranch and everything they endured on the path to keeping it safe.

The start of that story happened in 1883 with James and Margaret Dutton, and while we couldn’t get enough of the series, it was only set to exist for one season. As we shared recently, Sheridan said that initially, the powers that be wanted a second season of 1883. However, with the death toll at the end of the series, it was impossible to continue the story on the same level it was before.

Sheridan quickly got to the drawing board and came up with the premise for 1923 instead, and we’re blessed as a fan base that it worked out that way. We’ve only seen one episode so far, but it’s clear that he’s got a brilliant idea moving forward for the series, and the cast bringing it to life is ultra-talented.

However, there was a moment when another idea was shared — a death-defying idea. Sheridan talked more about that discussion in a recent chat with Deadline.

“They wanted to have a meeting about how Sam Elliott survived his suicide. By the very nature of the term it’s not something survivable, and who would want to see that? So, I said I’ll come up with another peek into the window and I sat there and tried to look at it.”

That’s right, fans didn’t see Elliott’s character take his own life, but we heard the shot once he finally traveled west and made it to the beach like he promised his wife they’d do. Brennan was a beloved character on the journey, and while he wasn’t a Dutton by blood, he was the equivalent of Rip Wheeler — the right-hand man we all hope to have.

So, of course, it would have been lovely for him to have survived and found happiness once more; but that’s not how his story wrapped up. Sheridan kept true to his writing style and the characters; because of it, fans have a new series to love.

Helen Mirren and Harrison Ford are the matriarch and patriarch of the Dutton family in 1923. The storyline revolves around being strong, determined, and ready to protect the family immediately. While each chapter of the Dutton family story is full of chaos and a struggle for survival, it seems that Cara and Jacob Dutton have their work cut out for them, and they’ll face several life-or-death situations in the episodes to come.

Speaking to Variety, Mirren said that she and Ford joined the series without reading scripts, something else Sheridan recently talked about as well. In her interview, Mirren added that a big piece of the puzzle for them was getting to work together.

“What interested me about I did see ‘1883,’ and that era of American history has always really fascinated me. The fact that Harrison was going to be involved was very important to me. Both of us committed to it without really reading any scripts. We didn’t really know what we were signing up for — the specifics of what we were signing up for. We had trust in Taylor’s extraordinary abilities as a writer, and we took a leap of faith.”

The pair took a leap of faith, which was a worthy one. With just one episode under our belts, we’ve already seen immense talent and heart from the characters. Everyone involved with telling the Dutton family story knows what an honor it is to bring it to life, and we’re lucky to be watching it as it comes to life.

With just one episode left until the midseason finale of Yellowstone, fans wonder what’s in store for the series when it returns in 2023. With the ranch hands and cowboys about to head off to work and Rip telling Beth that he’ll be gone for about a year, it’s evident that a lengthy journey is about to take place. Of course, Beth is trying to stop the whole thing from happening as she attempts to help her family farm financially; but as things stand now, the cattle are being moved from the Yellowstone, so travel is necessary.

Some fans are beginning to wonder if the midseason finale will be the last time we see this timeline for the Dutton family. When the series returns after the new year, will we only see the journey they’ve been on in flashbacks?

Maybe they’ll spend a few episodes going back and forth, which would also help set up the 6666 spinoff Sheridan has in the works. Maybe they’ll show some interaction between Jimmy and Emily with the ranch hands from the Yellowstone, further setting up the next leg of their journey, too.

Others wonder if the time jump will also serve to show us the results of what happens after the conclusion of the next episode where John Dutton’s run as Governor of Montana is concerned. The preview shows that Jamie isn’t kidding about wanting to impeach his father, and maybe we’ll only see what happens next in a series of flashbacks.

Of course, if things go the way Beth is hoping, there will need to be a time jump, as it’ll take some time to set up that storyline unless they walk us through it at the end of this season.

Part of the fun is theorizing about the series’ future, and we’ll have some fun waiting to see what happens between the mid-season finale and the start of the second half and again between seasons five and six. Here’s to the future of Yellowstone, and don’t forget to enjoy the past with a marathon happening on Paramount on Christmas Day.