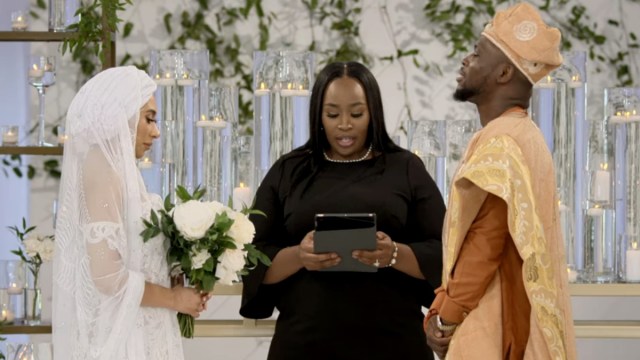 “We are saddened to announce that we have decided to go our separate ways,” Ross and Alagbada wrote in a joint statement to their respective Instagram stories. “Due to on-going legal proceedings surrounding these allegations, we can not provide additional details and ask that you please respect our privacy during this hard time.”

“Thank you for following our love story and believing in us,” the former couple added. “This journey has forever shaped our lives and we are so grateful for everyone who has been a part of it. Your love and support means everything.”

Ross and Alagbada famously did not get married at the altar, but had instead decided to continue dating without tying the knot. The couple were still together when the reunion special was released earlier this month, in tandem with the wedding episode. However, the split appears to have been sudden as multiple women accused SK of cheating on Raven, in a flurry of since-deleted TikTok posts.

The cheating rumors first came bubbling to the surface last week when TikTok user @emmwho9 claimed to have met SK on Hinge between the time that the series was filmed and the reunion episode aired.

“Put a finger down if you went on a date in April with a guy from Hinge and then you see that he’s actually on the show Love Is Blind, and that he met you after the show was filmed, but is still with the same girl right now,” she wrote, along with alleged screenshots of messages as well as a video of SK kayaking.

Then, a second woman came forward, TikTok user @hannahbethstyle, claiming to have dated SK back in 2019. She says that they split after a few months but stayed friends, and then she took a trip to Ibiza with him in July of 2021 just after season 3 was filmed.

“When your ex takes you to Europe and talks about getting back together, but on the trip you find out he has a ‘fiancé’ from a reality show he did on Netflix but then he tells you it’s all fake and for the money,” she wrote in one of two since-deleted videos.

In a second video, the woman dumped a metric ton of receipts including screenshots of text messages and photos and video from their trip.

Raven initially stood by SK, writing in a likewise since-deleted video: “Rumors are rumors, and we’re fine. That’s my man, and I’m sticking beside him.” However, Buzzfeed notes that since the second woman came forward, she has scrubbed SK from her Instagram page.

Though neither Raven nor SK have elaborated on the cheating rumors or split, 27-year-old Bartise Bowden, who notoriously was more interested in Ross than his own fiancee, 32-year-old speech pathologist Nancy Rodriguez, reacted simply by posting a meme of Kermit the Frog drinking a cup of tea on his own Instagram story.

Bartise can gloat all he wants, but we have a feeling Raven is still not interested.