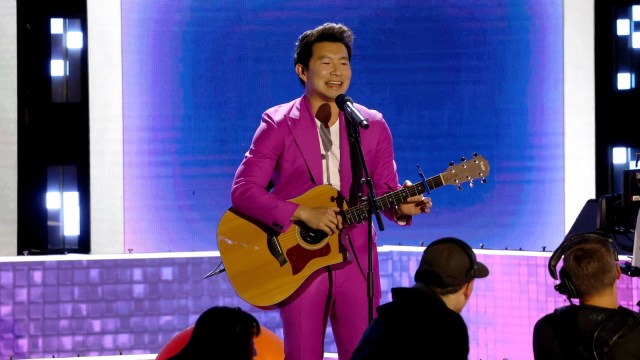 You may think Shang Chi doesn’t have any superpowers, but anyone who saw actor Simu Liu appear on Kimmel Live last night knows that’s wrong. Turns out that as well as being the greatest martial artist in the MCU, the guy also has a magic set of pipes. And the boy band propers to go with it.

Liu appeared on Jimmy Kimmel Live to promote his New York Times best-selling new memoir, We Were Dreamers: An Immigrant Superhero Origin Story but between stories of his parents’ immigrant journey he took a little time to serenade guest host Chelsea Handler and show off his impressive vocal chops.

It seems the Barbie star has a somewhat-hidden past as a member of a Canadian boy band called Lx4. Don’t look for them on Spotify though. Or even a used record bin. Liu formed the band when he was in high school with three other guys who all had last names that ended in “L.” Hence the name. The band had “0 singles, 0 chart-topping hits, but we always left the door open for a reunion, so maybe one of these days you’ll see us take back the mantle and get on stage again” Liu told Entertainment Weekly.

After being teased by Handler into showing off his skills Liu bashfully agreed to regale the studio audience. He spilled a little about his song, written when he was 12 before launching into the lyrics, accompanied by the Kimmel band. “It was so emo, like, 12-year-old kid,” said Liu before he busted out singing, “passing by you in the rain, oh hope to see you smile just maybe. You turn away from me again, tell me can’t you feel this way?”

Well, Harry Styles might not be quaking in his boots, but if Star-Lord can challenge Ronan the Accuser to a dance-off, who’s to say Shang Chi can’t throw down with Kang the Conqueror in a battle of the bands for the Phase 4 climax?