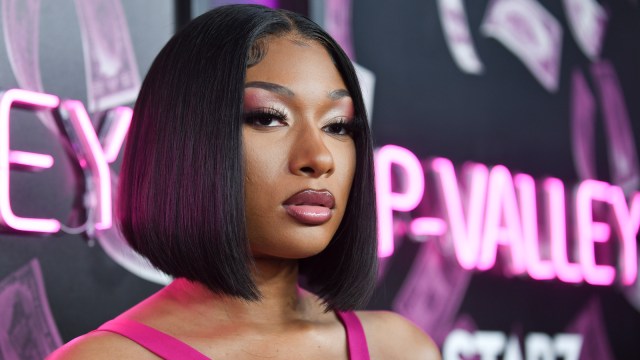 First Harry Styles boarded the Marvel universe in last year’s Eternals, and now another musical superstar is set to join the MCU in She-Hulk: Attorney at Law. We’re only two episodes into the legal-flavored sitcom, starring Tatiana Maslany as Bruce Banner’s similarly hulked-out cousin Jennifer Walters, so far, but it looks like we’ve got a lot to look forward to, including an upcoming role for Megan Thee Stallion.

In a profile piece with the multiple Grammy-Award winner, The Cut casually mentions that Megan Thee Stallion has been cast in the ongoing Disney Plus series, as well as in upcoming A24 musical F*cking Identical Twins. Although the rapper doesn’t directly address her presence in the Marvel show in the interview, she did reflect on who her inspirations are when it comes to rappers who became actors. Namely, Queen Latifah and Ice Cube. She explained:

So that’s all we know about this shock bit of casting, but we can presumably take this as confirmation that Megan Thee Stallion is officially set to hop aboard the MCU very soon. Fan detectives have actually had an inkling that this was on the horizon since March, when stunt performer Marché Day revealed that she was playing Thee Stallion’s stunt double on She-Hulk. But this is the first time the performer has effectively announced the news herself.

Stallion’s cameo isn’t the only one we’ve got to come on She-Hulk, as Charlie Cox’s Daredevil is set to return for a team-up with Marvel’s other superhero lawyer soon to boot. Don’t miss new episodes of the nine-part series as it unfolds Thursdays on Disney Plus.