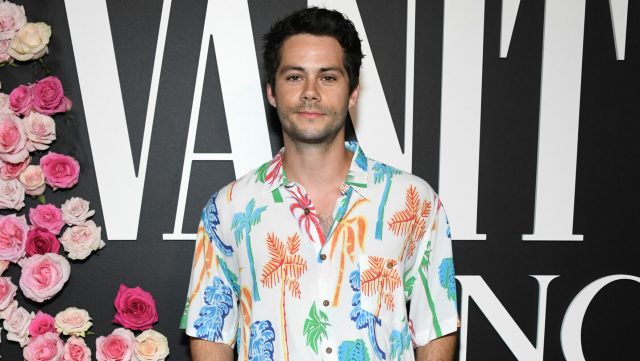 We’re still in the middle of a heat wave, still feeling quite parched — and yet Dylan O’Brien continues to show no regard for our hydration in the new trailer for his upcoming film, Not Okay.

O’Brien plays Colin, a “weed boy” who lives with the kind of IDGAF attitude that unfortunately makes most of us weak at the knees. He’s popular, well-liked, and social media famous — and he’s grabbing the attention of fans on Twitter since the trailer dropped this morning. Colin is the it boy, and O’Brien plays him with a suave disregard for anything that tries too hard.

Ryan Gosling might be going through his Kenaissance, but O’Brien is about to enter his Colinaissance — and it will be a run of bleach blonde glory. May the Colin era begin!

Fans are also challenging O’Brien to change his Twitter name and photo to this mix, and we can see why. We’re currently channeling our inner Blanche Devereaux and spritzing ourselves with water.

He’s the guy your mom warned you about, making him hotter.

Colin is a different character than fans are used to seeing O’Brien bring to life, and it’s an exciting prospect. Fans really can’t wait to see his grand debut.

While it might not be the most brilliant idea during these COVID times, but if O’Brien’s Colin is looking to — well, engage in that activity, he’s got fans ready and waiting.

Fans are also asking O’Brien to finally join Instagram; Colin has one — after all.

Obsessed is the word fans are going with.

Sometimes, all it takes is one word to sum up an emotion. This user chose wisely.

Is a blonde Dylan O’Brien here to stay? Recent photos say no, but there’s always the option to bring this beauty back.

Forever crush are also two words one could use to describe Colin, and they’re on point for fans worldwide.

Not Okay is heading to Hulu on July 29, and you can read our review here.