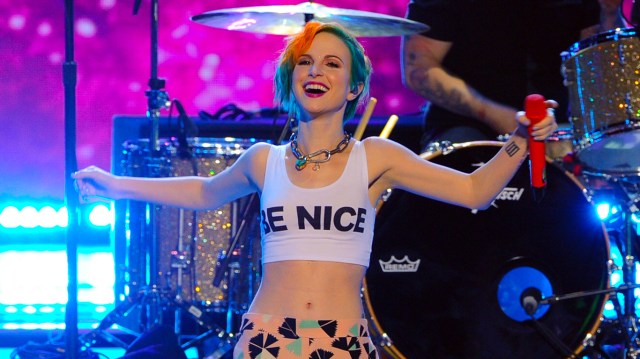 There was a special time in the middle of the aughts when the band Paramore was everywhere. You couldn’t leave the house (and especially not go to the mall) without hearing the band’s numerous hits. Now they’re back with new music for the first time since 2017’s After Laughter.

On Wednesday, the band shared a new song called “This is Why,” the title track from its upcoming album. One of the great things about Paramore is they’ve always low key been really good musicians and the new song shows some real growth. This isn’t your childhood Paramore anymore.

Don’t expect the frantic but masterfully crafted pop-punk leanings of a band in its early years. There’s a groove and complicated rhythms and lots of space. Underneath it all is the same “the dam’s about to break” energy but also a new maturity as well. Also kind of sounds like Beck, a little.

The video shows the band playing outdoors near a rock formation and a lake. There’s lots of Willaims dancing and members of the band sitting on things.

The band has been building to this for a while. The title was teased weeks ago along with the release date and lead singer talked about the future of the band in a note to fans.

“[We’re] just picking up where we left off. For so many reasons I don’t even have words for, I think we are about to experience our happiest, most fulfilling moments as Paramore. And when I say, ‘WE,’ I do hope by now you know what I mean.”

The band is also gearing up for a big tour as well, and the band members all refreshed their profile photos to their faces pressed against glass.

In a press release, Williams reveals that the new song was the last one the band wrote for the album. “To be honest, I was so tired of writing lyrics but Taylor convinced Zac and I both that we should work on this last idea. What came out of it was the title track for the whole album.”

“It summarizes the plethora of ridiculous emotions, the rollercoaster of being alive in 2022, having survived even just the last 3 or 4 years. You’d think after a global pandemic of fucking biblical proportions and the impending doom of a dying planet, that humans would have found it deep within themselves to be kinder or more empathetic or something.”

“This Is Why” releases on all streaming platforms and physically on Feb. 10, 2023. The band’s tour starts Oct. 2 in Bakersfield, Ca and runs through Nov. 9.