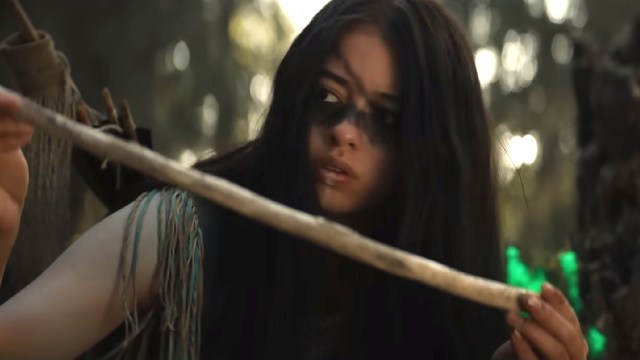 Dan Trachtenberg’s entry into the Predator franchise is a genuine game-changer.

The stellar release blew audiences away when it dropped on Hulu on Aug. 5, 2022, and soon urged newcomers to the franchise to give these bloody sci-fi thrillers a try. Prey is being broadly praised as the best entry in the Predator franchise since the first release, with some viewers elevating it even higher and declaring it the very best the franchise has to offer.

The film serves as a prequel to all of the existing films in the franchise, with a setting all the way back in 1719. It follows a young Comanche warrior as she works to protect her tribe against the terrifyingly capable Predator, an alien hunter bent on finding the most challenging prey her world has to offer. He finds it in Naru, played by Amber Midthunder, who uses ingenuity, sharp hunting skills, and sheer resolve to keep the humanoid alien butcher at bay.

Prey released to Hulu as a surprise hit, combining elements that made no sense on the surface, but yielded an absolutely stellar film. While Trachtenberg, the director, always had faith in the film he was making, he went out of his way to conceal the fact that he was making a Predator film, according to an appearance on The Filmcast. Trachtenberg told hosts David Chen, Devindra Hardawar, and Jeff Cannata that he wanted early trailers for the film to be secretive. He even joked that keeping his friends in the dark served as a major motivation for maintaining a low-key approach to the project.

According to the interview, Trachtenberg was long hoping that the first trailer for Prey would drop ahead of 2018’s The Predator, but teased very little about the film itself. “So you’d see a trailer for this movie that’s just the first part, this girl going out to prove herself and then sees a fire in the sky, and you’d be like ‘oh what the f-ck is that crazy movie,” Trachtenberg said. No name would accompany this early trailer, in Trachtenberg’s perfect world, leaving people to wonder after the strange, mysterious sci-fi release. Then, when The Predator was officially released, the full-length trailer would drop.

“When the 2018 Predator movie came out, [it] would be the full trailer for this movie which then reveals — of course using the bear sequence — so in the blood you reveal the shape and you go ‘Oh my god, that movie we’ve already been interested in, that was a Predator movie,” Trachtenberg gushed. His aim was to allure audiences with a simple, teasing clip from the film, and rely on piqued interest and mystery to keep curiosity alive.

While marketing for the film didn’t actually work out this way, mystery was still a major factor in Prey‘s approach. The film hardly feels like a Predator movie in many of its trailers, only unveiling the true antagonist via tiny clues and, finally, impactful reveals.

The Disney/Fox merger, paired with the COVID-19 pandemic, made Trachtenberg’s preferred marketing approach impossible, but he can sleep easy knowing that his creation still turned plenty of heads. The latest Predator flick is absolutely the one to watch — even if you’ve never enjoyed another film in the franchise — and Trachtenberg’s non-traditional approach is what makes it worth your while.