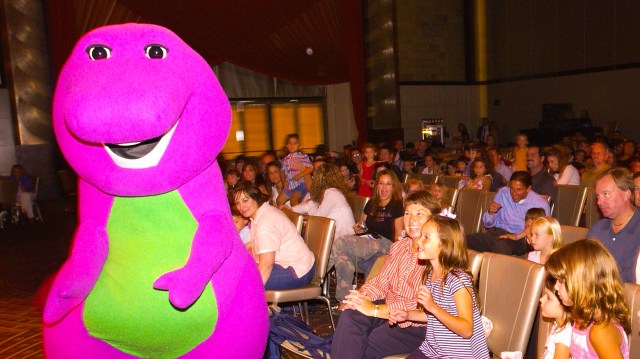 There’s even a darkside to Barney? Turns out not everything is hugs and smiles when it comes to one of the most beloved children’s characters ever. A new documentary based on the purple dinosaur aims to explore that dark avenue.

It’s called I Love You, You Hate Me and it premieres next month on the streaming network Peacock. The doc explores how the character became a magnet for vitriol and hate. David Joyner, who played the world famous children’s character for a period in the ’90s, also appears in the doc.

“As [creator Sheryl Leach’s] beloved character was heading into the stratosphere, people couldn’t accept that this was just a show. And so, let the bashing begin,” he said in the doc’s trailer, which asks: “Why does the world love to hate?”

After Barney first appeared, the character quickly became a children’s favorite, which set up a large backlash. This led to wild rumors like “Barney hides drugs in his tail.” Another man who played Barney, Bob West, said he faced threats against himself and his loved ones.

“They were violent and explicit, death and dismemberment of my family,” he said. “They were gonna come and find me, and they were going to kill me.”

“Barney came out on television when I was just 10 years old, and I admittedly didn’t understand him. As a teenager, for one of my birthdays I asked my aunt to make me a Barney costume, so my friends and I could beat him up on camera. Several years later, creating this docuseries, it feels good to be on the other side and no longer a Barney hater. Now having children of my own, I understand all the love that went into making the purple dinosaur.”

I Love You, You Hate Me premieres on Oct. 12. Check out the trailer below.