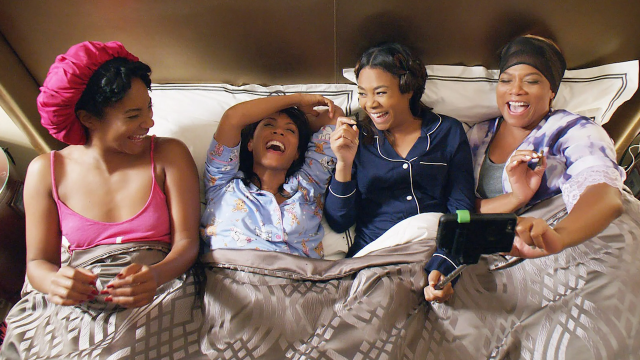 From an eye-opening sequence with a grapefruit to a rambunctious scene on Bourbon Street, 2017’s comedy spectacle Girls Trip successfully entertained audiences with its themes of loyalty, hilarity, and downright madness. With a star-studded lineup consisting of Regina Hall, Queen Latifah, Jada Pinkett Smith, and Tiffany Haddish, it was only a matter of time until folks demanded a sequel.

While the aforementioned sequel has already been confirmed, Hall, who portrays pack leader and lifestyle guru Ryan Pierce in the film, sadly revealed on GMA that production has yet to begin on the much-anticipated sequel, Girls Trip 2, saying:

“You know what, I hate disappointing… We’re not in production, it’s not written yet. But, I just can’t wait to see the script. It is gonna happen, from what I’ve been told, I did hear that they’re writing, everyone’s announced, so I think it’s probably just, you know, everything gets slowed down with schedules and then Omicron happened.”

Despite the COVID-19 variant setback and scheduling issues, Hall assured fans that the sequel is definitely happening, which means we certainly haven’t seen the last of our four favorite friends. We’re certainly looking forward to seeing which journey they embark on next. For now, devoted fans will have to sit back, relax, practice their grapefruits routines, and wait patiently as the forces behind the sequel work their magic and bring the Flossy Posse back to the big screen.

Girls Trip is currently available to stream on Amazon Prime.