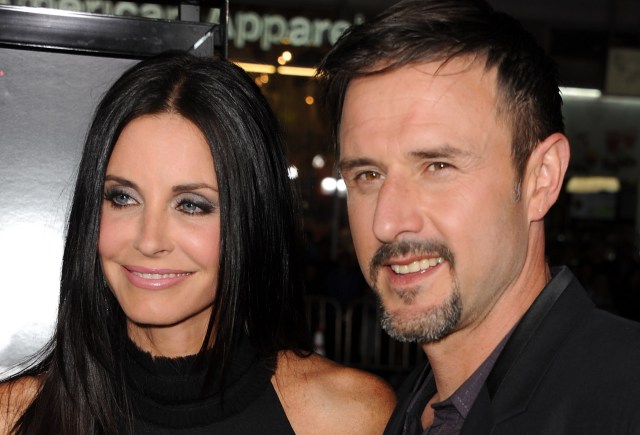 Before it sputtered out with a fourth entry in 2011, Scream was one of the most viable horror franchises around. When the first movie came out in 1996, it reinvented the genre with its meta-commentary on horror films and its introduction of the iconic Ghostface killer character.

The franchise is back in theaters with the fifth film, a reboot of sorts simply titled Scream – like the first movie. It features the same trio of characters from the first, too: Neve Campbell as Sidney Prescott, Courteney Cox as Gale Weathers, and David Arquette as Sheriff Dwight “Dewey” Riley.

The actors were just in the beginning of their burgeoning careers in the ’90s. Cox was in Friends and Arquette was a regular in various movies from the era. The two fell in love and married on the set but eventually separated in May of 2013.

In a recent piece about the film with the trio of actors, Arquette talked about what it was like working with his ex again. He said that it was pretty awkward working with her again.

“It’s been 25 years of our lives. We’ve grown up together. We have a child together.” He told The New York Times. He also said the opportunity wasn’t one he wanted to pass up. “It’s a cathartic experience to just be able to act opposite Courteney.”

He said he teared up when they filmed together for the first time after so many years.

“He got very emotional while he was filming it. He said the next day the crew didn’t look at him,” Cox said.

In the movie, the couple is also broken up. The script called for them to act out a particularly difficult breakup scene that paralleled their real life.

Arquette said he gave directors real-life photos of him and Cox to use in the movie. The whole thing, he said, was emotional and moving, especially since original director Wes Craven wasn’t around to guide them.

“There were moments when I felt Wes’s spirit around a lot. There would be a wind blowing, and I’d see Courteney’s hair move back. And then it’s just like [Arquette made a crying noise] It made it really easy to tap into those feelings,” he said.

One of the easier things about filming the movie and continuing its narrative is that literally, anyone can play the Ghostface character. Cox said this is part of what makes the movie so special.

“There’s a deeper meaning to the fact that anybody could be Ghostface,” she said. “What it’s taught me is that you don’t go into a parking lot, ever, at night. You don’t go to the bathroom in a movie theater. And anybody could go off the deep end.”

In addition to working together, the former couple co-parents their 17-year-old daughter Coco.