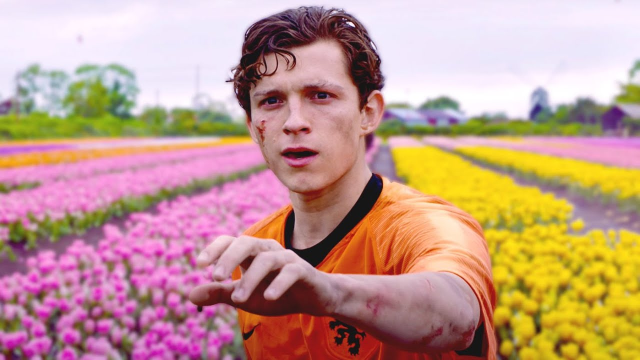 If you sat through Spider-Man: No Way Home without tears welling up in your eyes, well — we’re in awe of your strength and composure. The film was emotional on all levels and it was nearly (see also: totally) impossible to get through it without crying.

Tom Holland’s portrayal of Peter Parker is next level. The actor leans into the storyline like it’s what he was put on this earth to do, honoring Parker with a childlike belief in good while honing in on the levels of complexity that occur in growing up.

No Way Home is his most heart-wrenching journey yet, and a Reddit thread points out, quite possibly, the scene that had us all crying into our Twizzlers. Noting that Parker’s depth in the moment is layered and essential because it highlights a multitude of events taking place at once.

In addition to what’s happening in the scene, the conversation is more gut-wrenching. Happy asks Parker how he knew May, and it’s all just a lot to take in. We’ve seen him walk away from everyone he loves, peeking at them in their lives without his influence — all while carrying the emotions and the memories on his shoulders alone.

He knows why things happened the way they did and that it’s the only way to keep them all safe, but that doesn’t lessen the hurt he feels.

“Utterly alone” is the perfect description of the plane Parker exists on; we need just a moment.

Holland’s Parker really did lose everyone close to him, and he hasn’t had a lot of time to make sense of any of it.

Being able to mourn a loss with people surrounding you is an important part of the healing process, one that Parker isn’t privy to.

We didn’t really ask for it to be spelled out like this.

MJ’s line hit us where we were already hurt.

Holland’s portrayal of Peter Parker is something incredibly impactful within the MCU.

Again, we didn’t need to see it all laid out so plainly; we weren’t asking to be hurt today.

At the end of the day, the movie is heartbreaking — it was a great watch, something beautiful and really nostalgic for long-time fans of Spider-Man, but it hurt.

We’re certainly hoping to see more of Tom Holland’s Peter Parker within the MCU and the other side of the emotional decision to allow those he loved to live without his memory. Here’s hoping it happens soon, and it’s as heartwarming as a basket of sweet puppies; we all need it.