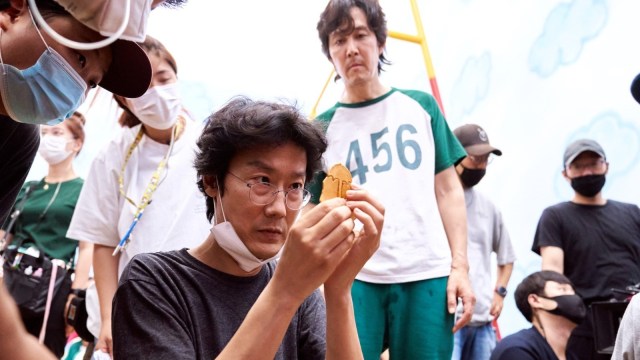 Emmy-award-winning director Hwang Dong-Hyuk, during a video call with Variety, revealed which game from Squid Game he believes he would win, were he ever to be put in the same circumstances as those on the critically acclaimed Netflix series.

Squid Game has a number of activities in which the characters partake, usually inspired by popular traditional games played by children in South Korea. With the intent of winning a huge sum of money, the players must complete all games and challenges and eliminate the other contestants while passing on to the next phase.

“I always tend to read the room and see what everyone else is doing, so I have to say the glass bridge.”

Dong-Hyuk went on to share his thoughts on what would happen if he were ever to be on the bridge, claiming he “would’ve definitely picked the last number” adding that, in a darker sense, he “would see everybody just die away before [his] eyes.” The director also adds that “just like Sang-Woo, Gi-hun and Sae-byeok,” he would most likely “be able to survive until the end standing on top of those that sacrificed their lives.”

On the same call, composer Jung Jae-il and VFX supervisor Cheong Jai-hoon also shared their five cents on the subject, both of them with vastly different opinions from the Squid Game director. Jae-il commented on the slim chance of his survival, candidly admitting he doesn’t “think [he] would have made it through any of the games” due to “scaring very easily.” Similar to the composer, Jai-hoon, the VFX supervisor wholeheartedly believes he would not win, but claims to be “very good at Achi,” and shares his interest in playing the abstract strategy game.

In June, and after a lot of speculation on behalf of fans, Netflix finally announced a second season for Squid Game. The date of release has yet to be confirmed by the platform.