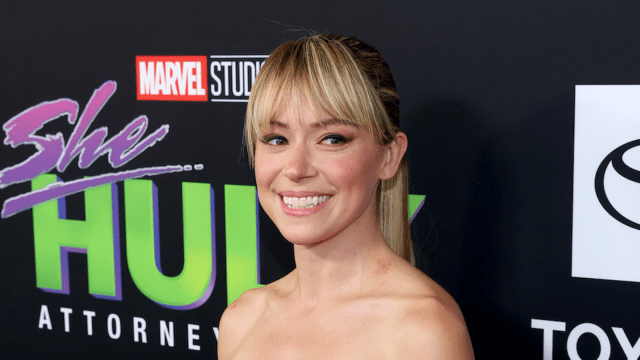 The red – well in this case, green – carpet was rolled out for She-Hulk: Attorney at Law as the stars of Marvel’s newest show step out to celebrate the upcoming release of the show on Disney Plus. The show, its release only a few days away, centers on Bruce Banner’s cousin, Jennifer Walters, played by Tatiana Maslany, who stunned in quite the jaw-dropping number at the launch event in Hollywood.

Maslany, known for her role in the critically acclaimed Orphan Black series, looked just as fabulous as her superhero character – though less gigantic and far less green. The actress wore a two-piece leather look bandeau and full-length skirt set which showed off her toned midsection. The outfit was accessorized with matching black gloves and hoop earrings in one ear. Maslany also showed off a new hairdo, forgoing her usual curly brown locks for a sleek blonde look, styled with bangs and a long ponytail.

The series will follow Jennifer Walters as she navigates her newfound powers, acquired thanks to her cousin Bruce Banner (Mark Ruffalo), aka The Hulk’s blood accidentally getting mixed with hers after a car crash. Unlike her cousin, she seems to have a lot more control over her changes, and in contrast with Banner’s arduous journey to combining his two selves, Walters appears to get there a lot faster.

After training with Banner, and finding she feels confident she has a handle on her abilities, Walters wants to continue with her hard-earned career as a lawyer, finding herself thrust into the new frontier of superhero law thanks to her unique position.

You can see the fabulous Maslany as the MCU’s newest addition to the superhero roster in She-Hulk: Attorney at Law on Disney Plus with the first episode premiering on August 18.