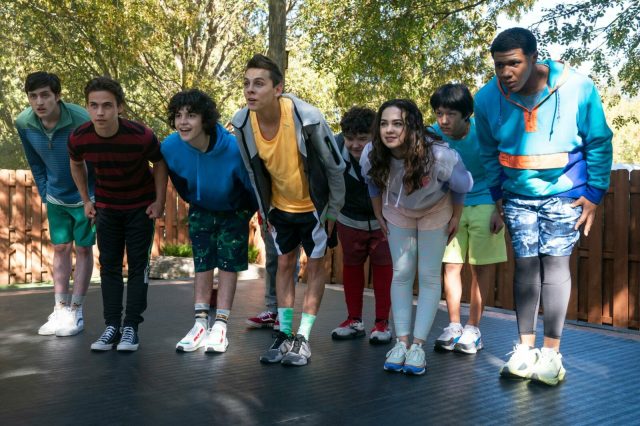 Dallas Dupree Young, Oona O’Brien, and Griffin Santopietro from Cobra Kai discuss how their onscreen senseis teach them in real life. The story follows Johnny (William Zabka) at a low point in his life following the events of the Karate Kid movies where he gets defeated by Daniel (Ralph Macchio). Johnny takes on a protege, Miguel (Xolo Maridueña), who he teaches the aggressive Cobra Kai style of karate, and his rivalry with Daniel is rekindled when he sees how successful his life has become.

In an interview with ScreenRant, the young actors discussed how their relationships with the adults in the cast. Young, who joined the cast in season four playing Kenny Payne, the bullied video game nerd turned martial artist, said how much he’s learned working with Thomas Ian Griffith, who reprises his Karate Kid III role as baddie Terry Silver.

“For me, personally, the answer that would come to mind would definitely be Terry Silver— Thomas Ian Griffith. He is pretty much like our sensei in real life and on camera.

“Anytime we’re slipping up on a certain technique and or a certain move, he’ll adjust it and let us know what we can do. Pretty much, if I’m throwing a punch, and I’m not turning my hips — I remember this happened early in the season — he just was like, ‘Hey, Dallas. If you just turn your hip a little bit more, you’ll have a little more power.’ And it really came to life; I did that. We had a conversation about different techniques; how to keep growing and keep learning in karate.”

Silver returned to the Karate Kid Universe in season four of Cobra Kai. He was enlisted by John Kreese (Martin Kove) to join him in taking over the Cobra Kai dojo, but in true villain fashion, Silver had bigger plans which will unfold in season five.

O’Brien was a recurring character in season four and plays debate team member Devon Lee who joins Johnny’s offshoot dojo, Eagle Fang. She spoke about working with Zabka and how he influences her acting and the technique of her martial arts.

“For me, it’s Johnny Lawrence—[William] Zabka. He always gives great advice, whether it’s acting or karate. These guys have been doing it for a while, and they’re pretty good at karate now too. So, they’re always there to help you out.”

Santopietro, who plays Daniel’s son, Anthony, has been in the show since the beginning; his only absence was in season three, but season four saw him take a more significant role. He was pressured by his friends to bully Kenny, and it pushed him down a dangerous road. The actor credits Macchio for being a father figure to him.

“I guess we’re all doing our actual senseis, but mine’s definitely got to be Ralph [Macchio]. Just getting to work with him for the last five years has been—mostly from an acting standpoint; I can’t speak too much to karate yet. But from the professional standpoint, he’s been really helpful in teaching me things; I’m just getting to watch him and learn. He’s like my TV dad, and I feel like I can come to him with any problem.”

In Cobra Kai season five, Miguel went to Mexico to find his father and Johnny will be searching for him. Silver is expanding his Cobra Kai dojos all throughout the San Fernando Valley, and Danny teams up with his former nemesis Chozen (Yuji Okumoto) to defeat him.