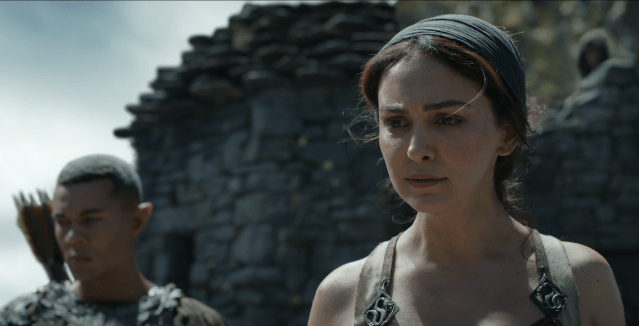 Amazon’s Lord of the Rings: The Rings of Power series has added a handful of brand new characters to Tolkien’s world in a bid to broaden the narrative. Despite many complaints from zealous Tolkien fans that it isn’t “true” to his world, many have embraced these new characters such as the dwarf princess, Disa, and the human Southlander, Bronwyn. The actress for the latter has spoken out recently about what a thrill it has been to take on the character.

Played by Nazanin Boniadi, Bronwyn is inspirational in her bravery in the face of evil. Talking to The Wrap, Boniadi discussed the impact the role has had on her, saying, “I truly felt exhilarated playing Bronwyn,” and it isn’t hard to see why.

When we first met Bronwyn we already found a woman who was a healer, a single mother to Theo (Tyroe Muhafidin), and engaged in a somewhat “are they are they not” forbidden relationship with the elf Arondir (Ismael Cruz Córdova). The character then fearlessly examines a potential disturbance not too far away with said elf, and, upon finding destruction, takes it upon herself to inform the town, who simply ignore her warnings. It isn’t until she unceremoniously dumps the head of an orc that she killed in her own home on the tavern counter that people decide they should do as she says. Without a legitimate ruler amongst them, Bronwyn takes up the mantle, encouraging her community to stand and fight, unafraid to physically throw herself into the melee.

Boniadi expresses how the characters determination to overthrow their oppressors is something that she connects with on a personal level,

“There’s a couple of scenes that really resonate deeply with me – one of them was one of my audition scenes, which is a speech. And it’s because I can relate to this woman who wants to liberate her people. It connects so deeply with me on a personal level with my activism for my homeland, Iran.”

Boniadi was born in Iran and grew up in England. What Amazon could not have predicted when they cast Boniadi in this role was the current protests Iran is witnessing country-wide that were sparked after a 22-year-old woman, Mahsa Amini, suspiciously died after the country’s morality police took her to a detention facility after accusing her of incorrectly wearing her hijab. (It should be known that Boniadi made these statements before the current situation in Iran developed.)

“I remember channeling that as if I was talking to my compatriots – the Iranian people. I’m like, ‘Let’s do this,’ and it just felt very much connected to my core essence. And there’s nothing quite like bringing to screen something that strikes you deep down and resonates with you on such a deep, human level. And then, of course, I love that she goes from being sort of this motivational figure in speaking to people to getting down and dirty and actually using the physical prowess to get done, whatever it takes.”

The actress discusses how excited she was when she heard about the role and how the character would develop.

“The promise of Bronwyn was really exciting. I was very keen to play this character that they told me would do incredible things, and that she wasn’t one dimensional. … She was multifaceted, and she had agency and that she was a healer, yes, and she was also a single mother to a rebellious teenage son, and had a forbidden romance with an elf and all those things. But .. the thing that was a pleasant surprise to me that was hinted at from the beginning – was her inner strength, the unlikely leader, the person who is nurturing on the one hand, but bold on the other, and that those things could coexist in a woman on screen, because we know that that exists in women in real life.”

Though there have been many valiant women in Tolkien’s work, they are mostly centered around male characters and friendships, even Peter Jackson had to shoehorn in the female elf Tauriel in The Hobbit and add extra scenes for Arwen in Lord of the Rings to make it feel a tad more balanced. It’s refreshing then to see so many strong female characters, rulers, and leaders then in Amazon’s Rings of Power series, which is doing its best to diversify Tolkien’s work, regardless of the naysayers.

The phenomenal sixth episode of the series saw Bronwyn at her finest, fighting alongside her people against the attack of the orcs, and through that battle was won thanks to the just-in-time arrival of the Númenóreans, Bronwyn’s acts of heroism were commendable. The shock twist at the ending though has left her and the town’s fate up in the air after the volcano that will become Mt. Doom erupted sending fiery rocks plummeting down and a huge pyroclast engulfing the town. She is one tough woman though and somehow, we think she will survive.

Lord of the Rings: The Rings of Power is currently available to watch on Amazon Prime.