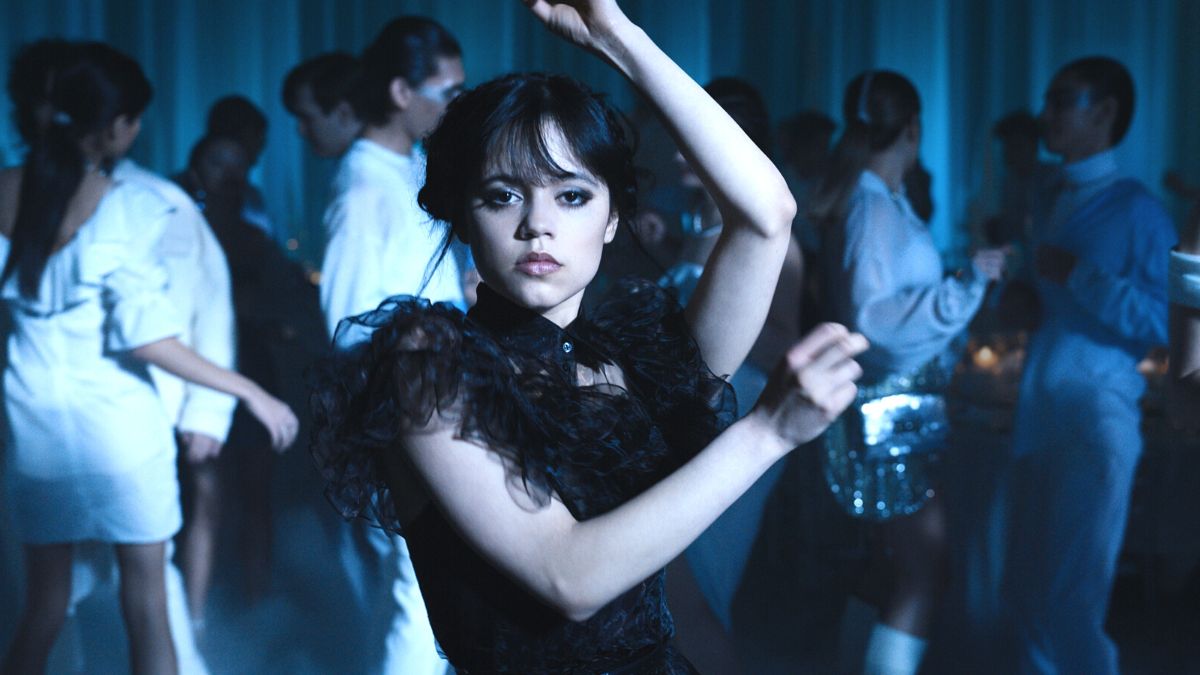 Nevermore Academy is renewing our application for a tortuous new semester alongside our favorite outcasts with the news that season two of the Netflix phenomenon, Wednesday, is on the horizon. While Wednesday herself is probably feeling rather blasé about the information, we simply can’t wait.

The announcement promises more misery is heading for our favorite apathetic gal, with haunts, hunts, and hexes already on the menu; you can color us excited but, like, in muted color tones. (We’re trying to channel our inner Wednesday, okay?)

A return to Nevermore was enough to bring the slightest smirk to Wednesday’s face in the teaser, and that’s saying everything right there. For our spooky and tortured Addams to feel anything at all — let alone anything resembling joy — must mean that season two will be full of the most agonizing and harrowing circumstances.

Maybe for this news, we’ll be Enid instead. At heart, we still consider ourselves a version of Wednesday, but how can we look forward to a second season without giddy smiles, impromptu dances in our room, and donning our best pink wig to celebrate the news?

A few things stick out to us immediately when looking ahead to season two. First things first, there’s an elephant that made its presence very obvious in the room as season one drew to a close.

Wednesday has a stalker

When Xavier gave Wednesday a cell phone at the end of the first season, it was more than just a friendly gesture. Their relationship was certainly full of ups and downs in the first season, and while they both betrayed one another, they found an excellent place to start building a friendship again.

Of course, the cell phone is more than just a way for Wednesday to keep in touch with her — dare we say — friends, as they all step away from Nevermore for a spell. It’s also a direct link to a stalker with their sights set on our snarky Wednesday.

As she was pulling out of Nevermore, her phone received messages, but they weren’t from Xavier at all. A stalker made their presence known, and there wasn’t fear in Wednesday’s voice upon discovering it; it would be just another (mis)adventure for her to take on.

In a chat with TV Guide, Miles Millar shares that they know who is taunting Wednesday, but they’re not giving it away. They didn’t want to give too much away without the promise of a second season, but now that it’s here — it’s game time.

“We know who it is, we can’t tease who it is.We never take for granted that we’re going to get a second season but we certainly have big plans and lots more stories to tell in terms of Wednesday and her friends.”

Alfred Gough backed up Millar and said they’re not sharing any other information, including “whether viewers have already met the person who is the stalker.”

Who might Wednesday ask for help? Surprisingly, that is a longer list than she might have anticipated herself. Wednesday went into Nevermore without a single care or concern about the students there, but she’s formed friendships with these people. Maybe friendship is a strong word, but some people would have her back if she needs it — like our favorite bubbly wolf, Enid.

Of course, fans want to see these two continue their unlikely friendship. The Wednesdays of the world would be better if they all had an Enid, and vice versa. We need someone to stand with us in the shadows and rejoice with us when things are all sunshine and rainbows.

While Enid and Wednesday are going to their respective homes during this break from Nevermore, they’ve got a method of contact now, and if Wednesday needs anything at all — Enid won’t be far away.

Enid has officially “wolfed out” now, and will need her stoic bestie to talk to. We all know Wednesday’s backstory, and while each version of her retelling is different, we’re curious to see what Enid’s story holds. We’ve been given some insight as she’s grown closer with Wednesday and as we met her folks, but at this crucial turning point for both the light and dark side of our hearts, we’re curious to see how the latest happenings at Nevermore affect them.

Enid isn’t the only one Wednesday grew disgustingly closer to over the first chapter of her stay at Nevermore. We’re crossing our fingers that we get more of Wednesday and Xavier, Bianca, Eugene, and Ajax (to name a few).

If there’s a stalker after Wednesday, those she’s formed bonds with are also at risk, so the Nevermore outcasts will have to be closer than ever.

Closer than ever, but with a healthy dose of apprehension. Wednesday said it herself, her first kiss turned out to be with a serial killer — how perfectly on brand. That brings us to our next issue: Tyler.

What’s next for Tyler (and Ms. Thornhill)

Even though Tyler and his alter-ego of the Hyde have been “caught,” that doesn’t mean we’ve seen the last of him, leaving us feeling mixed emotions. We had a bit of a love-hate relationship with Tyler throughout the entire first season, feeling sorry for him in moments, and hoping he’d be banished to some eternal depths of hell in others.

With Ms. Thornhill likely meeting her very timely demise, that should mean that her spell over Tyler is broken, perhaps allowing him to learn to control the “beast within.” That being said, this is a show about the supernatural, and while Thornhill was a “normie,” we’re not sure if we’ve really seen the last of her yet.

So what would the future look like if Tyler worked his way back into the equation? We think it would be less romantic where Wednesday is concerned, and honestly, we’re not sure we want to see him regain favorable standing with our outcasts just yet. They went through hell together, and he needs time to learn to control his violent alter-ego. Not enough time has passed for him to know how to handle it yet.

Speaking of time passed, should we anticipate seeing more flashbacks with Wednesday’s ancestor?

Goody Addams was introduced in Netflix’s Wednesday, and she is a character that could greatly help Wednesday. As fans discovered, Wednesday began having visions, and she’s unsure how to control something she doesn’t understand. While offering help to Wednesday, we learned that Goody lived a similar path, helping her group of outcasts in her timeline. She experienced visions throughout her life, too, so she’s a valuable source of wisdom and kinship, even though she’s deceased and not exactly a tangible, reliable resource.

With a new threat to Wednesday and the outcasts of Nevermore, Goody’s influence may be more helpful than ever, especially if there’s a way for Wednesday to channel her visions and help discover who is lurking and watching her every move. Plus, with that gif the unknown contact sent Wednesday’s phone, it’s evident that they’re not just stalking her; they want Wednesday out of the picture, but what for?

Is it someone jealous of her newfound fame, despite not desiring it at all? Is she so apathetically chill that one of the famous students wants to take her down a notch? Could it be that someone envies her bond with Enid or that she’s the object of Xavier’s artsy and tortured eye? What if it’s bigger than Nevermore altogether? Could some normies be fed up with Nevermore, upset that one of their “own” ended up being the Hyde? The possibilities are endless, but one thing is for sure — without help and the ability to control her visions, this won’t be easy for Wednesday.

One person — or rather, one Thing, might help Wednesday with her troubles in season two as well.

Even though Thing can’t speak because he’s well… a hand, we hope to see more moments with these two together. If you add Enid to the mix, you get the friendship we never knew we needed but are so glad we found. Thing is Wednesday’s right-hand man (some pun intended) never lets her go through anything alone, so when we thought we lost our infamously frightening Addams family member last season, we were heartbroken.

It was also a moment when we saw genuine emotion from Wednesday; she realized that even though she could walk through this life alone and not feel upset about it, she’d rather not. She likes having Thing by her side, and we can’t wait to see what kind of mischief they get into when the series returns. Plus, with a stalker on the prowl, who better to help investigate than a hand who faces danger like he was created for it?

Outside of the stalker, things will continue as usual at Nevermore, and Thing will have a blast there too. From character-building exercises to school dances, he’ll be in attendance for sure. On the topic of school dances, there’s something else we hope to see when season two premieres.

One of our favorite moments in Wednesday was the callback to Carrie, and we’re hoping for another when Wednesday comes back for its epic sophomore season. What other icons in the horror/slasher genre could they nod to? The possibilities are endless. With young adults together away at a boarding school of sorts, a stalker on the horizon, and supernatural magic in the air: we could see everything from Scream and I Know What You Did Last Summer to Dracula and anything by Edgar Allen Poe.

Poe is one of the school’s most famous alumni, after all.