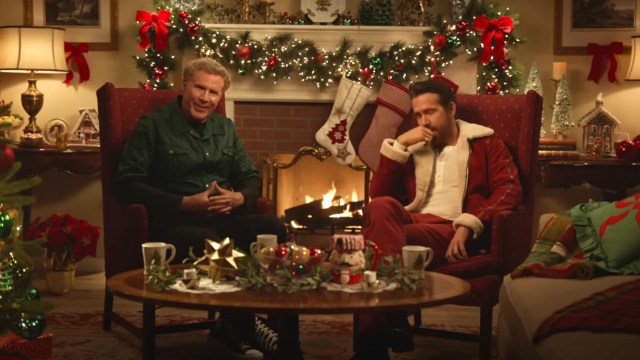 Ryan Reynolds once again sat down with a co-star to deliver a humor-filled video about an upcoming project. This project is a little closer to hand though, as he and Will Ferrell discuss their Christmas musical Spirited. The two comedic talents wanted to make audiences well aware that this is not Elf. It’s different, so don’t expect Elf.

You hear that? NO ELF!

Sat in armchairs by the fire surrounded by lashings of Christmas decorations, Ferrell has to perk up a rather despondent-looking Reynolds. The Deadpool star immediately groans and utters “this sucks” before even introducing himself prompting Ferrel to ask what’s wrong. Reynolds responds, “do you have any idea what it is like to be in a Will Ferrell Christmas movie that’s not Elf?”

Reynolds counters, “Yes they are. Instead, they’re getting a musical from two guys with questionable pitch.”

Ferrell seems to take offense but his side look to the camera suggests Reynolds is not wrong.

They then go into “some simple disclaimers” to inform fans that the film is neither Elf nor Deadpool (though Reynolds’ look suggests otherwise). Instead, it’s a musical, it’s funny, and it’s going to be on Apple TV Plus. The whole thing is further humorously underscored by the many asterisk captions at the bottom of the video.

Reynolds is a masterful marketer, both letting the audience know what their upcoming movie is about and what they can expect whilst filling it with self-deprecating humor that most find endearing. It’s the combination of not taking themselves too seriously whilst promoting their work that audiences love, and seeing two comic acting legends together that has a certain pull as well.

Spirited is a modern comedic retelling of the Charles Dickens classic, that apparently needs to be made at least every half a decade or so, A Christmas Carol. In this version, the Ghost of Christmas Present picks the wrong dark soul to haunt and finds the tables turned on him with the story told from his perspective for the first time.

As mentioned above Spirited will be available on Apple TV Plus from Nov. 18 after a limited theatrical run from Nov. 11.