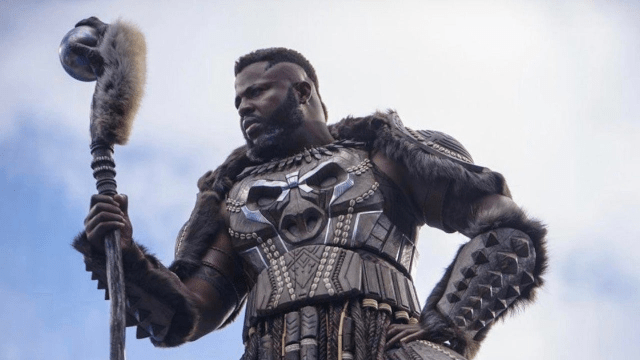 High emotions must have been all but unavoidable on the set of Black Panther: Wakanda Forever — not only was the entire cast and crew mourning the loss of their friend in colleague Chadwick Boseman, but the film itself is a cathartic study of grief and loss. Winston Duke wants one thing made clear though, whatever the cast’s feelings were, Leticia Wright’s views on vaccines were not a mitigating factor.

Duke, who plays the Wakandan warrior M’Baku, leader of the mountain Jabari tribe, was quick to dispel the long-running rumors that Wright’s purported views on vaccination had any effect on the filming telling Esquire that, “it’s not anything that’s ever come up.”

The film’s production was plagued by many problems, including multiple production setbacks due to COVID and an accident during a stunt sequence which resulted in a nasty injury for Wright, who portrays the Wakandan Princess Shuri. Wright was severely concussed after the accident that also fractured her shoulder blade. However, many online “sleuths” put forth the theory that Wright’s injury was merely a ruse and that the actress had either voluntarily withdrawn from filming or was being replaced by higher-ups after posting a 69-minute anti-vaccination video on Twitter in December of 2020.

The video, which has since been removed from YouTube for violating its TOS, featured Tomi Arayomi, a senior leader and speaker with Light London Church, and questioned the legitimacy of the Covid-19 vaccine and also alleged that the virus had been manufactured by China. Wright subsequently stated she was only raising concerns about the vaccine and then left social media.

Earlier this week, Duke and Wright’s co-star Angela Bassett debunked the rumors that Wright had spread any anti-vaccine sentiments on set. Duke now vociferously joins Bassett, stating that it’s “not anything I’ve ever seen or experienced any problem with her on set. Other than third-hand reports in the media, I never even knew she had this position.”

For her part, Wright appears to have avoided mentioning the issue or her feelings for it in the last few months leading up to Black Panther: Wakanda Forever, and the film’s producers seem to have followed her lead. As for Duke, he maintains, “We’ve never had an on-set problem with Letitia and her alleged stance.”