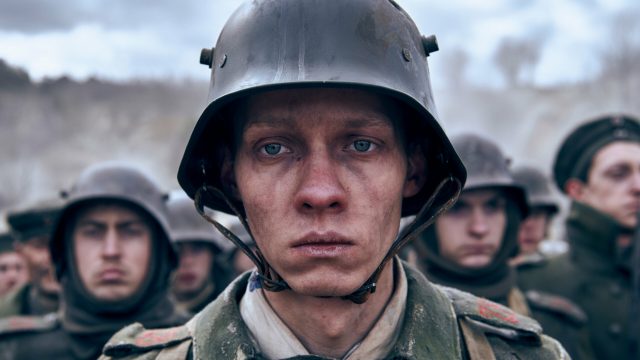 Image via Netflix
Review of: All Quiet On The Western Front

Berger's film makes the most of what modern technology has brought to filmmaking, while retaining the original's hauntingly intimate exploration of these soldiers' psyche.

The Academy Award-winning 1930 masterpiece on the senselessness of World War I, Lewis Milestone’s All Quiet On The Western Front, is an almost untouchable movie. Its incredibly progressive view of the Great War as pointless violence in the name of a country that only saw you as a pair of boots and a rifle was as universal and timeless then as it is now.

All Quiet On The Western Front was equally revolutionary for centering the side which has been labeled by history as the loser, in a war where every party lost so much. It was the compassion it showed towards German soldiers that entered the battlefield under the guise of patriotism, only to be used as pieces in somebody else’s game, that moved so many.

Choosing to take a crack at retelling this story takes guts, and the comparisons to its predecessor were always going to be unavoidable. However, the result has been nothing short of extraordinary.

Edward Berger’s 2022 version becomes all the more necessary not just because of its cinematic achievements, but because it marks the very first German-language film adaptation of Erich Maria Remarque’s 1929 novel Im Westen nichts Neues. I can’t speak for the importance of this book in German literature, but it’s undeniable the gut-punching strength that the story gains when performed in its original language.

Berger’s film makes the most of what modern technology has brought to filmmaking, while retaining the original work’s hauntingly intimate exploration of these soldiers’ psyche. It doesn’t get lost in the excitement of shooting big action sequences, or organizing all the components in the frame so that everything flows like cascading dominoes. Instead, it grounds itself entirely in its characters’ feelings (primarily those of Paul Bäumer, played by Felix Kammerer) and in the smallest of details.

All Quiet On The Western Front understands that the cruelty of war is as much in the trenches and the bloodshed as it is in the uniforms of fallen soldiers being passed down to their successors with their name tags still on; from the seamstresses mechanically patching up bullet holes in countless jackets, to the handkerchief that smells like a lady’s perfume, and in the General’s dog feasting while the soldiers at the front starve.

The movie hops from the battlefield and following Paul and his crew, to a pair of complimentary storylines focusing on Matthias Erzberger (Daniel Brühl) as he negotiates the armistice, and the cruel General Friedrichs (Devid Striesow) – who struggles to find an identity outside of war. These two arcs feel somewhat superfluous when compared to the emotional pull of the film’s main thrust, but they proficiently serve their purpose of adding a wider historical context to the film, as well as conveying the complete detachment between the gruesome reality of the front line and the cold power plays of the men in charge.

As a whole, All Quiet On The Western Front misses no beats. It’s a complete film, with a clear vision, a number of unforgettable hard-hitting scenes, and a web of fantastic characters. It definitely relies more on the power of imagery and symbolism than words and speeches (more prominent in its 1930 counterpart), which was ultimately the right move given today’s hyper-visual society, and the crisp quality of modern cameras.

However, the dialogue does end up suffering as a result. Despite their conciseness doing the job – and probably being more realistic to what the experience of a group of men on the ground is like – it does stunt the emotional attachment between the viewer and the supporting cast that gives the story so much more vigor and beauty.

This war epic shouldn’t be as focused on Paul and Kat, but also spend more time on Kropp, Müller, and Tjaden. The bond between these soldiers is the heart of this story, and it could have beaten a little harder in this 2022 version. It ended up feeling rather secondary in Berger’s take, something an additional few minutes of runtime might have fixed.

All Quiet On The Western Front is nonetheless a near-flawless war movie that ticks all the boxes of what the genre demands, while maintaining the source material’s subversive anti-war approach. It’s visually stunning despite holding no punches in its portrayal of war’s violent, dirty, and gory nature. Above all, Berger delivers a chilling cinematic experience that should become mandatory viewing for everyone in today’s social climate.

All Quiet On The Western Front is available to stream now on Netflix.

All Quiet On The Western Front

Berger's film makes the most of what modern technology has brought to filmmaking, while retaining the original's hauntingly intimate exploration of these soldiers' psyche.