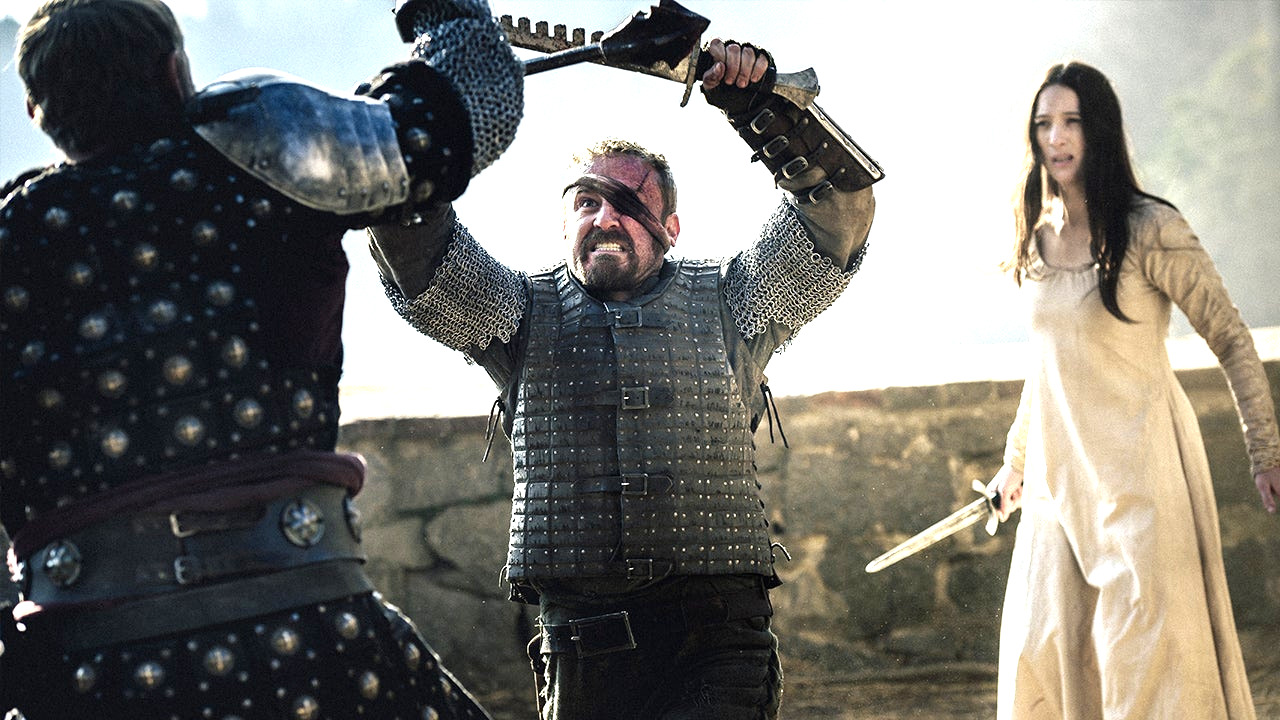 'Medieval' works best when it throws dirt, mud, blood, and body parts at the screen, with the crunching battle scenes just about overcoming the narrative shortcomings.

The historical epic might not be anywhere near as popular as it was in the early-to-mid 2000s when the post-Gladiator boom was in full swing, but the genre has still churned out plenty of solid movies, even if the commercial success is often at odds with the critical reception. Petr Jákl’s Medieval is the latest to enter the fray, and while the ambition is admirable, several notable shortcomings prevent the ambitious tale from maximizing its cinematic potential.

There’s a great deal of pressure on the project both at home and abroad, with the dramatization of local folk hero Jan Žižka’s story coming burdened with the tag of being the most expensive Czech production ever made, which might go some way to explaining why American star Ben Foster was cast in the lead role.

The 41 year-old is one of the most captivating, engaging, and intense talents of his generation at his best, but the decision to play Žižka as the stoic, brooding type both hampers Foster’s naturally magnetic presence, and transforms the protagonist into little more than a cipher used to drive the plot from one beat to the next, a disservice to the near-mythological status the legendary military leader holds among the local populace.

That’s not to say Medieval doesn’t come packing a punch, with Jákl orchestrating a string of wince-inducing brawls, battles, skirmishes, and scraps that hardly skimp on the blood, guts, and gore. If you’ve come looking for 125 minutes of crisp cinematography, impeccable production design, and impressive set pieces, then you’re in the right place. However, those expecting intimate character-driven drama may end up feeling a touch disappointed.

Žižka is heralded as a tactical innovator that allegedly never lost a fight, despite regularly charging into battle while facing seemingly insurmountable odds. Medieval heads a little further back to 1402 (22 years before his death), where the story picks up with Foster’s rugged hero and his close-knit band of warriors in Italy.

Screen legend Michael Caine brings exactly the amount of dignity and gravitas you’d expect to the role of Lord Boreš (a fictional character created for the film), who tasks Žižka and his crew to prevent a political assassination that could exacerbate tensions in a Bohemia that’s already been ravaged by infighting and civil war. As overdone as the “quest/fetch and retrieve” throughline has become in features of a similar ilk, Medieval manages to retain interest by means of mud, blood, and war, even when the pace inevitably begins to sag as the sprawling ensemble cast and their various motivations and machinations are revealed.

Boreš wants to stem the tide of discontent that’s been flowing since Holy Roman Emperor Charles IV’s death. Karel Roden’s Bohemian monarch Wenceslaus IV is next in line, but he’s being actively sabotaged and undermined by his nearest and dearest, which includes Matthew Goode’s King Sigismund of Hungary, and Til Schweiger’s duplicitous nobleman Henry of Rosenberg.

In turn, that places Sophie Lowe’s Lady Katharine at the center of a maelstrom that involves all of the aforementioned political heavy hitters, with Žižka reluctantly agreeing to mount a daring kidnap due to a combination of loyalty and financial motivation. Throw in Roland Moller as Sigismund’s right hand Torak, as well as William Moseley as Jan’s younger sibling Jaroslav, and Medieval runs the risk of becoming too dense and over-complicated for those unfamiliar with the fascinating history behind the film.

Thankfully, even though the running time stretches a shade beyond two hours, co-writer and director Jákl (whose father Petr Jákl Sr. takes a story credit) always makes sure to punctuate debate and exposition with a grandstanding show of violence, providing the picture with regular jolts of visual electricity and kinetic panache that ensure things never run the risk of slowing down to a complete standstill. Old school but refreshingly modern, the sword-swinging brawls are always framed in a way that demands your attention, with Philip Klein’s score and Steven Rosenblum’s tight editing ensuring that every blow carries real weight in more ways than one.

Foster has been deserving of a major leading role in a blockbuster epic for what feels like forever, and even though he goes all-in to commit to the role of Žižka, nobody’s going to be looking back on Medieval as one of his strongest performances. It’s a minor negative, but not one that’s intended to be a slight on the end product, which offers a regularly arresting clash between old and new school approaches to the genre, with Jákl acquitting himself very well as he confidently and assuredly makes an ambitious leap forward as a filmmaker after previously helming low budget drama Kajínek and found footage 3D horror Ghoul.

Medieval isn’t going to win over many new converts to the historical action-adventure arena, but it’s nonetheless a solidly entertaining and well-made slice of hard-hitting cinema that works best when the audience is placed right in the thick of the action. Žižka was lauded for his inventiveness on the battlefield, and you’ll understand why by the time you’ve watched him use his wits just as much as his sword to tear through the latest line of enemy defenses. Far from perfect, but a million miles away from disaster, Medieval doesn’t quite live up to the legendary status of its central figure, but who or what even can?

'Medieval' works best when it throws dirt, mud, blood, and body parts at the screen, with the crunching battle scenes just about overcoming the narrative shortcomings.