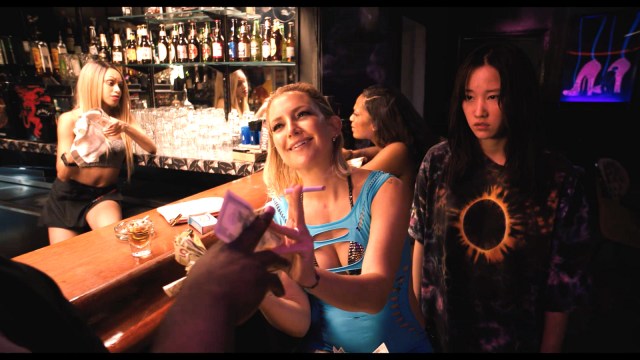 via Saban Films
Review of: Review: ‘Mona Lisa and the Blood Moon’ Is No Oil Painting

Visually stunning but lacking in so many other areas of invention, 'Mona Lisa and the Blood Moon' merely offers platforms for Kate Hudson, Ed Skrein, and company to dive into deviant characterization.

From the outset, unsettling imagery and a gritty performance make this cinematic break from reality an engaging, if not altogether cohesive experience. Having manifested her own release from incarceration early on, Mona Lisa ventures into New Orleans looking first for food, before seeking a safe haven. Having culled Officer Harold (Craig Robinson) through a combination of hypnosis and pure cunning, Mona next comes across Fuzz (Ed Skrein), who is perhaps the only figure in the story who never seeks to manipulate her.

With symbolism etched into his skin and leopard print upholstery passing for taste, this Day-Glo drug dealer proves to be Mona’s only source of salvation on her crazy journey. Writer and director Ana Lily Amirpour populates her New Orleans with some stylishly sleazy creations, who turn this voodoo mecca into an off-kilter out-of-body experience – dragging audiences through sordid nightclub encounters, and along corridors distorted by a fish eye lens perspective.

From her groundbreaking feature film debut A Girl Walks Home Alone at Night, through to The Bad Batch and now Blood Moon, there is a pre-occupation with outsiders which proliferates her work. Just as Jason Mamoa and Jim Carrey disappeared down a rabbit hole of invention for The Bad Batch, so Kate Hudson tackles some reinvention of her own by slipping into the scuzzy skin of Bonnie, a single parent stripper, who takes Mona Lisa under her wing early on.

Quick to catch on to Mona’s unique gift, Bonnie uses her young charge to extort money from the unwary patrons of a low-rent Spearmint Rhino, known locally as The Panty Drop. With her young son Charlie (Evan Whitten) wise to his mother’s intentions, both Mona and Charlie soon team up, leaving Bonnie to fend for herself. Pursued across the city by Officer Harold walking with a cane, this unlikely duo make for an engaging pair.

Unfortunately, beyond the visual flair and committed characterizations from everyone involved, Mona Lisa and the Blood Moon lacks substance. There is no denying the sense of fanfare which is built into this ultra-violet interpretation of New Orleans, but it feels like these characters lack direction.

Too much time is spent meandering through fleeting encounters, as Mona Lisa drifts from one moment to the next without a discernible narrative thread. Herself and Charlie may run away with the police, while Bonnie gets her comeuppance, but this morality tale feels flimsy nonetheless. There are visual comparisons to be made with Nicholas Winding Refn’s Neon Demon, who populates his films with similar examples of hyper-reality. However, his cinematic creations manifest a different animal from the one audiences will see here.

There is a lack of refinement which is defined by an absence of story, making Mona Lisa and the Blood Moon rely too heavily on sensory stimulus. This New Orleans is a cinematic creation pure and simple, making that symbolic blood moon almost sensual in its artifice. This setting also drips with decadence, while a seemingly straightforward story plays out against a visually audacious backdrop.

As for the performances which exist within this outlandish visual tapestry, Hudson and Skrein do their best to disappear. The former plays against type, exposing flesh and leaning into her manipulative stereotype, whilst sharing some genuine moments of pathos with young Whitten. Skrein, on the other hand, exhibits a tender side to Fuzz’s abrasive persona, as Mona Lisa slowly works her way into his affections.

However, Jong-seo remains the beating heart of this abstract travelog, as she negotiates her way through New Orleans searching for meaning beyond that asylum. A journey which offers so much dramatic potential, yet ultimately amounts to very little. For audiences, this equates to a wasted journey into a visually stunning world, where not much actually happens. Rather than being the After Hours Scorsese homage it hinted at, Mona Lisa and the Blood Moon loses its way, and becomes little more than a pretty distraction.

Review: ‘Mona Lisa and the Blood Moon’ Is No Oil Painting

Visually stunning but lacking in so many other areas of invention, 'Mona Lisa and the Blood Moon' merely offers platforms for Kate Hudson, Ed Skrein, and company to dive into deviant characterization.