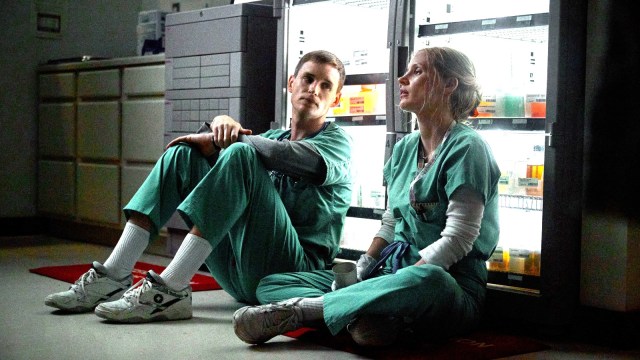 'The Good Nurse' may focus on someone believed to be one of the most prolific serial killers in history, but the smartest decision the dramatic thriller makes is shying away from the sensationalism of harrowing real-life events.

Modern audiences have become increasingly insatiable when it comes to their desire for content revolving around notorious serial killers, unsolved cases, and long-running mysteries, whether that’s through feature films, episodic shows, documentaries or podcasts. Sensationalism can often be used as a crutch to fall back on, but Netflix’s upcoming true-life thriller The Good Nurse (premiering on October 26) wisely focuses on the bigger picture rather than the horrific crimes themselves, which is to the film’s immense benefit.

Director Tobias Lindholm’s slow-burning mix of character-driven drama, investigative procedural, and unsettling look at the damage done by turning a blind eye could have taken the easy way out and placed most of its focus on the shocking atrocities committed by Charles Cullen, a nurse who was convicted of killing 29 patients during a 16 year-career working in hospitals across the United States.

However, experts believe he may be responsible for up to 400 deaths, which would make him one of the most prolific serial killers in recorded history. While that sort of eye-catching soundbite could have been used as an mass-marketing hook with which to build a story catered to the voracious appetite viewers have for such morbid stories, The Good Nurse thrives because it’s a lot more interested in asking the question “why was this allowed to happen?” rather than “how did he get away with it?”.

It helps immeasurably that Academy Award-nominated 1917 writer Krysty Wilson-Cairns’ script is measured, thoughtful, and often heart-wrenching without being anything close to cloying or on-the-nose, while the two central performances from Jessica Chastain as Amy Loughren and Eddie Redmayne’s Cullen are every bit as riveting as you’d expect from a pair of Oscar winners getting the chance to sink their teeth into such weighty material.

Even if you’re not familiar with the ins and outs of the case, Lindholm deftly sets the stage in the very first scene. Shot in an increasingly excruciating long take as various medical personnel rush in to desperately try and save the life of a coding patient, the camera slowly pulls in on Redmayne. He may have been the one who called for help in the first place, but his expression becomes increasingly blank as the shot closes in, an unsettling introduction to someone that’s mastered the art of refusing to let their veneer crack when people are watching.

From there, we’re introduced to Chastain’s single mother, desperately trying to juggle her family life with the day-to-day trials and tribulations of working on the ward, and that’s without even mentioning a potentially life-threatening heart condition that stretches her increasingly thin on both the physical and emotional front. When Redmayne’s Charlie starts on the same shift, she views him as something akin to a godsend after he helps lighten the load on both fronts, to the extent he’s quickly welcomed into her family.

At the same time, the police are looking into a string of unexplainable deaths, but they’re being stonewalled by the hospital’s authority figures. The top brass are reluctant to provide documentation to assist the investigation, and they seem keenly aware that a suspiciously high volume of patients have mysteriously passed away, but the looming threat of legal culpability were anything to be exposed or admitted has them sworn to silence in a damning indictment of the healthcare system.

Noah Emmerich and Nnamdi Asomugha’s dogged cops aren’t going to give up without a fight, though, and the two strands of the narrative eventually dovetail when it transpires that nobody at any of Charlie’s former places of employment are willing to discuss or divulge any details of his residency or departure, with Amy’s worst fears becoming increasingly real as she reconnects with a former colleague who tells her flat-out that the body count dropped dramatically when her new BFF moved on.

Redmayne has always possessed an effervescent charm and underlying sense of innocence, which is exactly what makes his turn so haunting. Even as the walls begin to close in around him, the facade of a well-to-do and helpful professional remains firmly in place, but when the mask does slip – the outbursts of emotion, rage, and fury are jarring. Whether it’s deliberate or not, there’s definitely a Norman Bates vibe in place, with the actor proving increasingly discomforting and unnerving as his double life bubbles to the surface, all while he resolutely refuses to break character as anything other than happy-go-lucky Charlie.

He’s got an excellent sparring partner in Chastain, too, who presents Amy as a strong-willed and unyieldingly resilient force, albeit one who’s only ever barely managing to stay afloat as she’s plunged headlong into an unfathomable situation where her health, well-being, career, friends, and family are all placed under a spotlight so bright it threatens to burn everything she knows and loves to the ground.

Some of the Acting with a capital “A” may be a little too much for some, and one scene towards the end is in serious danger of becoming the internet’s next Nicolas Cage-level meme, but if you cast a pair of Oscar winners in a harrowing dramatization of unspeakable events, then the occasional exaggerated line reading or navel-gazing introspection is an expected part of the deal.

Either way, The Good Nurse manages to succeed at being both a big and small film at the same time. It focuses entirely on a small number of pivotal figures, but takes aim at the American economy, the bureaucracy of the medical industry, and the rampant focus on the capitalistic side of life-saving (or ending, in this case) treatments at the expense of the human element. It’s a delicate tightrope to walk, and there may be a couple of near-misses along the way, but it never comes close to falling off.

'The Good Nurse' may focus on someone believed to be one of the most prolific serial killers in history, but the smartest decision the dramatic thriller makes is shying away from the sensationalism of harrowing real-life events.