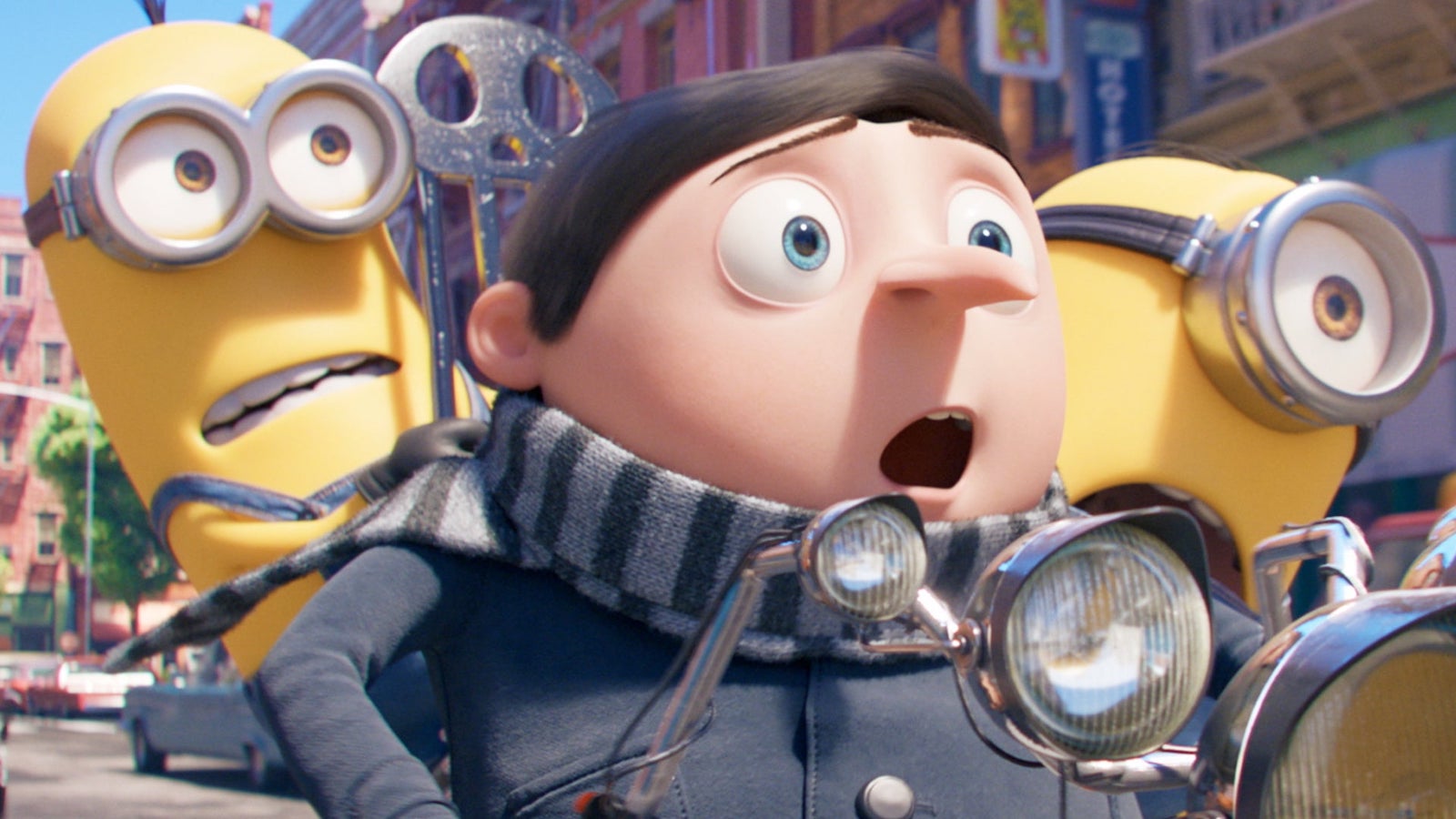 Image via Illumination
Review of:

Minions: The Rise of Gru, a film dedicated to the Minions’ master, is the latest villain origin story to hit theaters. But this is not the Jokerification of Gru. It’s not very apparent why the 11 ½-year-old is drawn to the villain’s life while his peers want to be doctors and firefighters. Maybe because his dad is gone and his mom (played by the deliciously bitchy and underutilized Dame Julie Andrews) isn’t very nice? It’s never apparent that he cares about that.

Though it provides plenty of laughs along the way (a casket full of bananas gag will always be a perfect choice) and plenty to feast your eyes on, it doesn’t do much to flesh out Gru as a character or establish a particularly compelling plot.

Gru comes of age in the 70s, though you wouldn’t know it given Young Gru has the adult version’s same uniform of skinny jeans and a striped scarf. The difference is the tween version’s black side-bangs make him look like a member of Fall Out Boy.

The Minions come into Gru’s life after answering his Help Wanted ad when he was putting his basement lair together and over-delivered on the promise. At times, he shows something vaguely resembling affection towards them, letting them sleep in his bed when they have nightmares.

His heroes are a group of villains called the Vicious 6, now down to five members after kicking out their founder, Wild Knuckles (Alan Arkin), for…being good at his job? White Knuckles acquires an amulet that will instill powers of some kind in its owner on the Chinese New Year, and the rest of the group steals it, leaving White Knuckles to fall to his presumed death.

Gru gets the opportunity of a lifetime: an interview to take his hero White Knuckles’ place in Vicious 6. Immediately, he finds his henchmen to be beneath even serving him and attempts to lay them off, certain of his own villainy, despite the fact that they are quite good at their jobs.

This is when the movie really gets into the 70s groove as the Vicious 6 HQ is hidden beneath a record shop. Going back in time makes the jokes aimed at the adults in the audience, like a Tupperware party, a little too easy, but entertaining and perhaps educational. Jack Antonoff, the pop producer of the moment, handled the soundtrack, bringing in 70s icon Diana Ross alongside contemporary artists who make albums that sound like they were made in the 70s, like Tame Impala and St. Vincent, along to cover hits of the time. A major plot point involves playing a Linda Ronstadt single (“You’re No Good,” get it?) backward. As a 33-year-old woman who has attended multiple Phoebe Bridgers concerts and bought a copy of Living in the USA on vinyl a couple weeks ago, I felt baited but amused.

When Gru stands before his idols, they realize he mistakenly scored an interview due to them not realizing he is a child. He tries to talk himself into staying, but they’ll hear none of it. But by a stroke of luck, he falls into a situation of power, facing off against the very same villains whose posters wallpaper his bedroom. Gru continues to fail upwards, taking advantage of others’ strategies, inventions, and hard work. In other words, he’s fit to be a leader.

The Vicious 6 seem to be very much style over substance. Belle Bottom (Viola Davis) is the new leader, but it’s unclear what she’s aiming for beyond fame. Xena herself Lucy Lawless plays Nun-Chuck, a nun with nunchucks; Jean-Claud Van Damme is the only man for the role of Jean Clawed; Danny Trejo is the buff Stronghold; and Dolph Lundgren is a Viking named Svengeance. They’re great ideas for villains, but the movie doesn’t do enough to show off their particular skills.

Michelle Yeoh plays a retired Kung Fu instructor who sees the trio of best-known minions getting beat up by far more intimidating henchmen and takes pity on them. After saving Kevin, Stuart, and Bob, she begrudgingly agrees to train them and, by defacto, ends up on Gru’s side, which is a confusing move for a character introduced to us as a crusader for justice. Yeoh, of course, elevates the material, but her subplot is awkwardly woven into the rest of the movie.

For a movie comprised primarily of villains and the Minions doing their bidding, there isn’t much evil to speak of, which would be fine if there was any true good for the middling acts of no good to contrast with. It’s not easy to get the right balance of bad in a movie for kids, but the stakes have to be higher. Scar DID that, and The Lion King was a massive hit; kids can handle more than the movie gives them credit for.

The Minions are only loyal to Gru because they happened to see and respond to his ad, not actual belief in his mission. The movie’s tension comes from the majority of the non-Minion characters acting in self-interest and feeding their own egos, which isn’t a particularly novel tale. Babes, are you the Democratic party? Because your infighting is preventing you from getting anything done.

Perhaps it’s a relief that the film does not, as is a trope in recent films, end in Gru’s temporary redemption, but at least that would be a conclusion of some sort. Instead, we’re left with entertaining but toothless villain-lair-building.