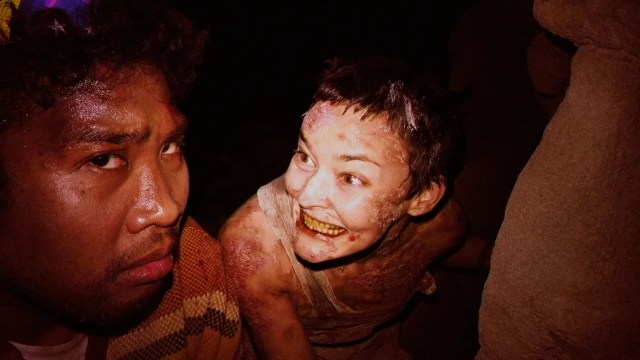 via AMC Networks/Shudder
Review of: V/H/S/ 99

When the movie doesn’t meander and its filmmakers understand how to use their time, V/H/S 99 buzzes with creative energy. At its best, it has all the pleasure of popping in a tape late at night and letting the television light wash over your room.

Found footage films have a specific set of delights — there’s the voyeuristic appeal of looking at something that feels clandestine, the conceptual ideas filmmakers can only get away with in this format, and the opportunity for special effects that have the power to both impress and nauseate. The V/H/S series is adept at exploring them, plus there’s room within the anthology format of the movies for a filmmaker to showcase their own strengths and interests. V/H/S 99, the latest entry in the franchise, is no exception with five segments that waver in quality but manage to deliver something enjoyable along the way.

Shirking the tradition of the series so far, there is no singular wraparound premise for V/H/S 99, just stop-motion animated short films created by one of the characters from one of the segments, ‘The Gawkers,’ directed by Tyler MacIntyre. We don’t get to meet the teenagers behind the camera and in ‘Gawkers’ until nearly the end of the film though, but the film opens strongly with ‘Shredding,’ directed by Maggie Levin. Following the pursuits of a teenage band on a mission to play a show at an underground venue that was the site of disaster years ago for the last band to have played there, ‘Shredding’ is a fun mix of 80s and 90s music video styles with a zombie band thrown in, too. It’s less scary, but a nice way to dive into the decidedly late-90s vibe V/H/S 99 is going for. Next is ‘Suicide Bid,’ directed by Johannes Roberts, a story about a sorority hazing gone horribly awry when a pledge is forced to spend the night buried alive in a coffin. You can probably guess what happens next, but let’s just say it’s all fun and games until a former pledge decides to resurface beneath the muck.

Flying Lotus’s segment, ‘Ozzy’s Dungeon’ is next, and makes for one of the best parts of V/H/S 99. We follow a Double Dare/Legends of the Hidden Temple style show that goes horribly wrong for one young contestant. Then, the segment takes a hard turn, making it a surreal revenge nightmare (complete with lots of visceral goop and guts). The execution and direction of this segment in particular make it stand out — it feels distinct, focused, and fun in the way only a V/H/S 99 segment can. ‘Ozzy’s Dungeon’ makes the most of the limited time it has to make an impression. The result is something akin to the previous installment’s ‘Storm Drain’ an excellent filmmaker showcase that almost bursts out of the film with potential and power.

Next is the aforementioned ‘Gawkers’ segment, which is a good, if not a little predictable story about teenage creeps spying on their hot neighbor and then getting their comeuppance. Finally, however, is another standout segment ‘To Hell and Back,’ directed by Vanessa & Joseph Winter (who also directed Deadstream). The story follows two friends who are hired to film a summoning on New Year’s Eve of 1999, but accidentally find themselves in Hell. Their journey back is horrifying and hilarious, making for a strong ending to the movie as a whole.

Overall, V/H/S 99 is a solid entry in the franchise, with at least three segments that make the film worth checking out if you’re a fan of found footage horror or just a fan of filmmaker showcases. There are unique concepts, effective uses of time, and sharp storytelling to be found here. When the movie doesn’t meander and its filmmakers understand how to use their time, V/H/S 99 buzzes with creative energy. At its best, it has all the pleasure of popping in a tape late at night and letting the television light wash over your room.

When the movie doesn’t meander and its filmmakers understand how to use their time, V/H/S 99 buzzes with creative energy. At its best, it has all the pleasure of popping in a tape late at night and letting the television light wash over your room.