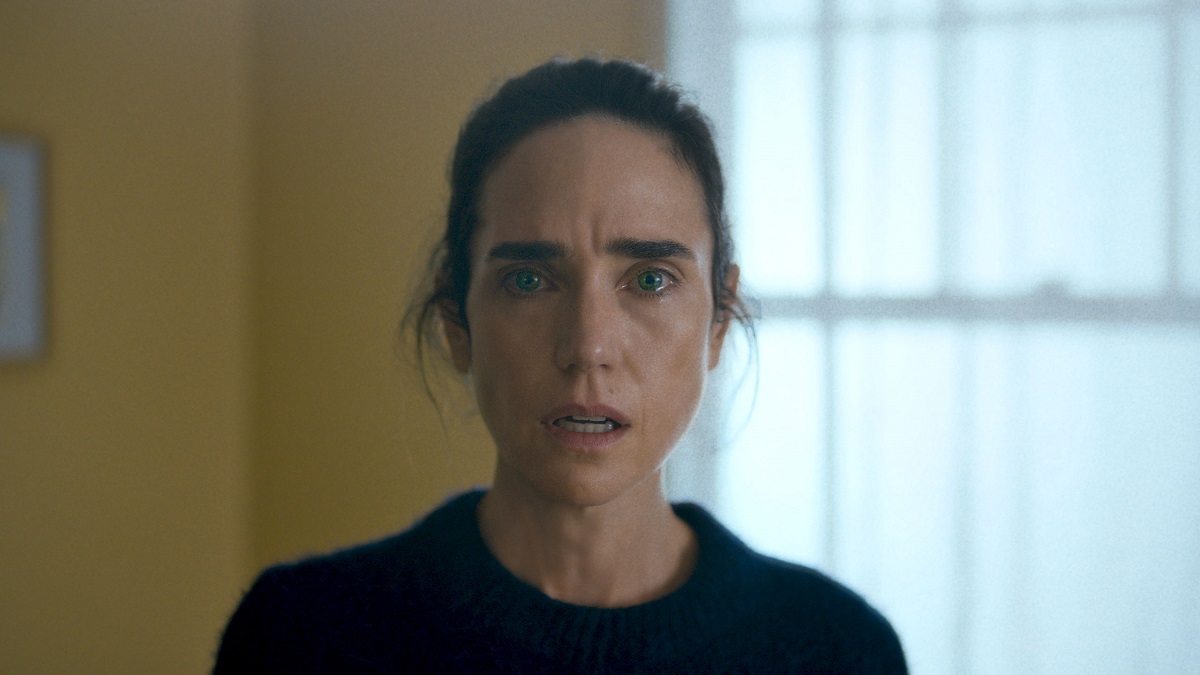 Playing Lucy, a faded child star who made her money from one long-running show before falling from grace, Connelly is a mass of nerve energy. Heading to a silent retreat in Oregon for the weekend, she is in search of spiritual fulfillment and karmic rejuvenation. Across the world in New Zealand, her daughter Dylan (Alice Englert) is dealing with something similar as a professional stunt-person on movie sets.

Issues of tone present themselves almost immediately in Bad Behavior, as attempts at comedy fall flat, while self-appointed shaman Elon (Whishaw), proves to be far from effective. When Lucy encounters other residents, each of whom brings their own particular set of quirks, events also grind to a halt dramatically.

The only sense of drama which manifests on-screen is between Lucy and fashion model Beverly (Dasha Nekrasova), who just rub each other up the wrong way. Meanwhile, Elon floats around dishing out introspective fortune cookie phrases, or secretly smoking next to the rubbish bins. In truth, none of these shortcomings can be blamed on Whishaw, Connelly, or the other assembled cast members. Putting it plainly, these actors simply have nothing to work with.

Violent outbursts, deflated confessional meetings, and awkward trust exercises just miss the comedy mark by miles. That audiences are consistently pulled away from this group to watch Dylan quietly start an affair in New Zealand, incur injuries on set, or amuse herself taking smartphone selfies does nothing to make things better.

At times, Connelly looks to be in a different movie, while Whishaw might well be phoning it in as Elon. Perhaps audiences should take it as a sign when he hightails it into the woods following Lucy’s arrest for grievous bodily harm — a plot twist which at the time and in retrospect feels contrived — as she lashes out at policemen who have come to take her away.

This suspicion is only compounded further by the fact that Dylan loses her job, due to the injury, and decides to fly home to be with her mother. With the retreat a distant memory and Lucy holed up in a local hotel, Dylan arrives for moral support as her mother has a court case pending. Understandably, Beverly has decided to press charges for the assault and wants compensation.

Having retained the services of an unnamed lawyer played by Karan Gill, Lucy and Dylan set about deciding her plea. Woodland walks into the wilderness somehow play a part in the process, meaning that Dylan and the lawyer are soon left alone while Lucy wanders off. Left alone and for no reason, Dylan decides to try and seduce their lawyer, but understandably that goes nowhere.

For any audiences going into Bad Behavior hoping for a coherent story – be warned, this is not the film to watch. Under the circumstances, given the material, these performances are far better than they have a right to be. Connelly makes a silk purse from a sow’s eye, while Ben Whishaw leans into vague incoherence to breathe life into Elon.

That being said, even these excellent character actors are unable to salvage anything other than their dignity from this debacle. A statement which only gains further credence, when for some unknown reason, Elon starts appearing inside cave openings later on in the movie. Where writer director Alice Englert thought this particular narrative thread was leading is up for debate.

From a structural perspective, this means that Bad Behavior is a hot mess of a movie, which feels fragmented, and never really hangs together. It is simply a waste of world class talent, who do their best to make the characters work within a scenario that lacks dramatic sense. Not only making the viewing experience hard work, but ultimately making the whole endeavor feel like a waste of time and money.

When audiences stumble across Whishaw and Connelly in this film, just remember that there was obviously something which attracted them to the role. After almost two hours and no clear sense of direction, one can only assume they chalked this one up to experience.

Sundance Review: Forget about the 'Behaviour' this is just plain 'Bad'