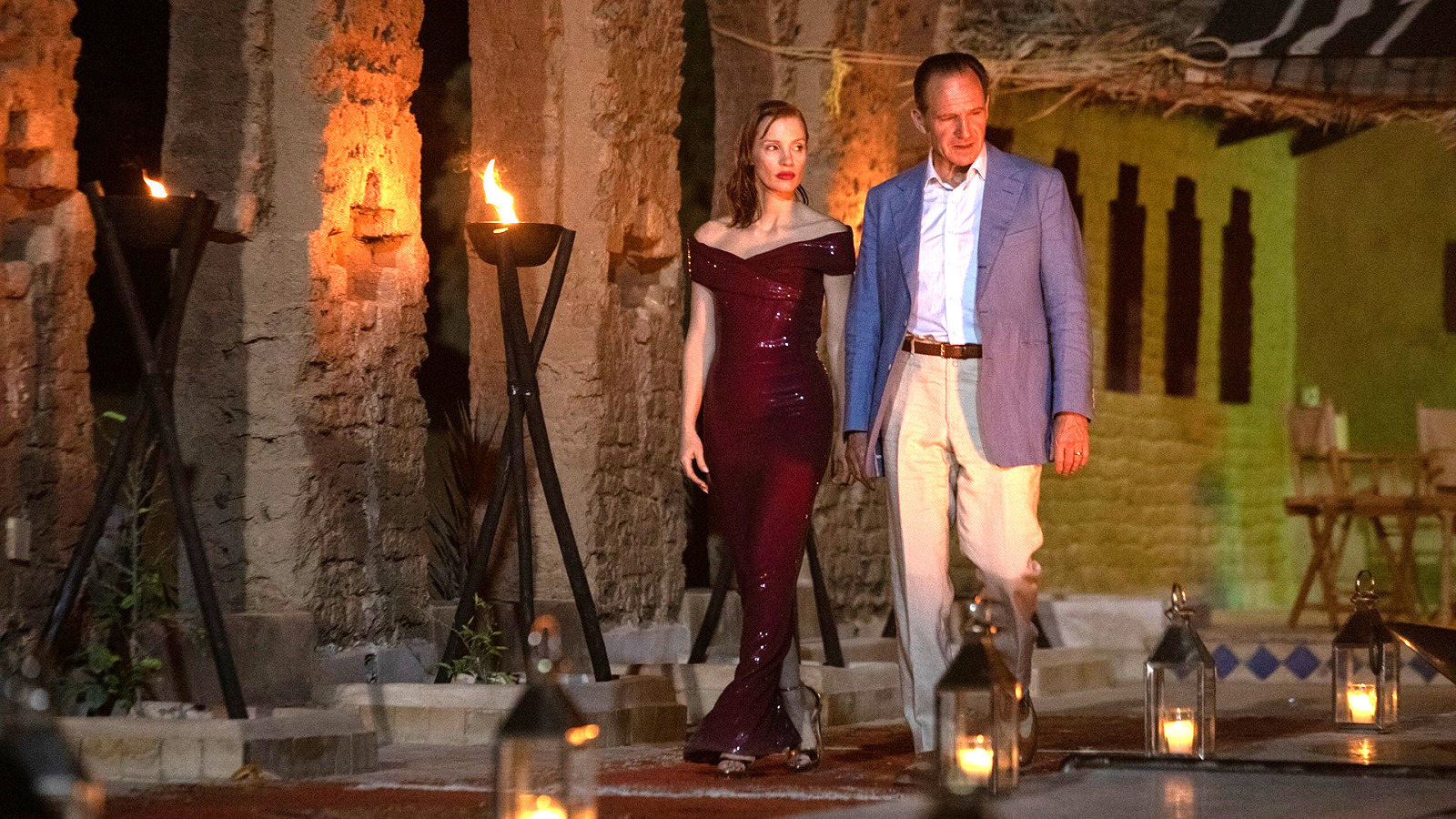 via Roadside Attractions Vertical Entertainment
Review of: Tribeca Review: 'The Forgiven' is a morally ambiguous melodrama which lacks closure

'The Forgiven' is a decadent melodrama about entitlement, which tries to explore morality, mortality and personal choice. Using the burnished backdrop of a Morocan desert to unpack its complex debate, with varying degrees of success.

Adapted for the screen and directed by John Michael McDonagh (Cavalry), The Forgiven is a melodrama that specifically explores cultural differences. It opens in cloying heat as David Henninger (Ralph Fiennes) and his wife Jo (Jessica Chastian) nurse the remnants of their broken marriage, with their respite from each other deep in the Moroccan desert being friends Richard Galloway (Matt Smith) and Dally Margolis (Caleb Landry Jones), who are throwing a party.

However, before they can reach the decadent pair, they come unstuck when David hits a local boy with his car. Not only does the incident put them in direct conflict with the locals, but it threatens to burst the bubble of isolated opulence Dally and Richard have created.

In many ways, The Forgiven feels like an old-fashioned epic comparable with A Passage to India in attitude, where locals were portrayed as uncivilized retches, in comparison to their colonial masters. The Forgiven might have evolved slightly more than that David Lean classic, but remnants from it remain in this adaptation.

Atmospheric, primitive, and primal – the film really tries to engage audiences. As Moroccan police question David about the incident, he treats them in an abrupt and off-hand manner, hiding behind his status and breeding, as if that will protect him from paying the price. Everyone else is either disinterested or working to their own agenda, embracing all the temptations this party can offer.

McDonagh ensures that dramatic momentum is maintained by instigating a literal road trip, following the arrival of the victim’s father – who insists David returns to bury his son. It is a crucial moment when they first encounter each other, with the boy Driss (Omar Ghazaoui) laying on a slab between them. One is blinkered by generations of entitlement, while the other stands in silence assessing a murderer.

At this point, The Forgiven faces a crossroads of its own, as David heads off with the grieving father (Ismael Kanater) and his interpreter Anouar (Said Taghmaoui). This turns the tale into a travelog drama with character moments thrown in, as David heads off while the others remain, where debates around cultural differences, historical relevance and personal opinion add further depth.

From those who choose to stay, Isabelle (Marie-Josee Croze), Tom Day (Christopher Abbott) and Chastain’s Jo make the biggest impression by either gossiping about their hosts, or getting indiscreetly intimate while David is away, meaning that between the highbrow conversations, inappropriate philandering and philosophical digressions, The Forgiven gains a rare cinematic mystique.

Elsewhere, the sumptuous drama is elevated by some outstanding production design from Willem Smit, while an eclectic choice of instruments selected by Lorne Balfe (Top Gun: Maverick) captures the essence of this sun-baked locale. It’s a combination of audiovisual excellence reminiscent of The English Patient, which also featured Fiennes in leading man mode.

However, The Forgiven also brings to mind other adaptations including The Talented Mr. Ripley and The Two Faces of January; films which hinged on characters in culturally challenging situations, embracing infidelity and deceit. However, beyond that, The Forgiven offers more than just exotic locations and affairs of the heart – as it touches on matters of mortality, morality and legacy.

As audiences are pulled between the decadence of Western culture and the stoic austerity of Muslim life, almost everyone undergoes change. David has an epiphany when faced with this grieving father that softens those harder edges, forcing him to assess his own mortality in light of the pain he has caused someone else. There is no one to carry on his bloodline, and more importantly, no one to mourn his passing.

That’s when everything gets pulled into focus for him, as David is forced to confront some cold hard facts; realizations that form the backbone of a selfless act of contrition, witnessed by wife Jo. Oddly, in the aftermath of his actions, The Forgiven still feels morally ambiguous, while any conclusions it comes to are never made clear.

Ultimately, the film suffers from a lack of dramatic clarity, which causes great performances from Fiennes, Abbot, Chastain, and Smith to be lost in a sea of powerful images and abstract musings. The Forgiven should have been an epic morality tale with acres of grey area, but somehow misses its mark, forever scuppered by a cliched ending and a conclusive lack of closure for audiences.

Tribeca Review: 'The Forgiven' is a morally ambiguous melodrama which lacks closure

'The Forgiven' is a decadent melodrama about entitlement, which tries to explore morality, mortality and personal choice. Using the burnished backdrop of a Morocan desert to unpack its complex debate, with varying degrees of success.