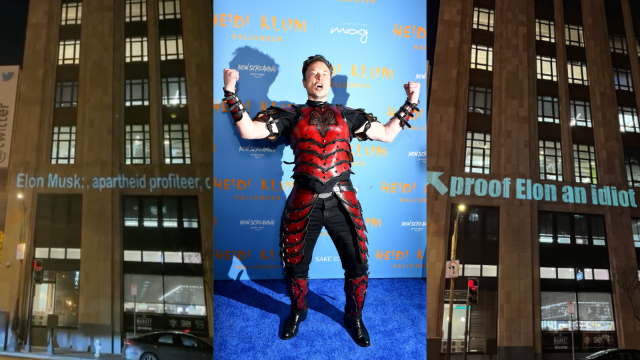 Twitter is going the way of the dodo if insiders and internet users are to be believed, as Elon Musk’s acquisition of the site becomes an apparent cataclysmic failure. Just in case he didn’t already know it, a tech graffiti artist has projected his failures onto the headquarters.

Since Musk acquired Twitter for $44 billion (roughly $32 billion more than its estimated worth), the site has gone from weak to weaker. Advertisers have pulled out, users have boycotted, and most importantly employees have fled like it’s a natural disaster. Now, there’s a clever graffiti artist at play making sure everyone knows how much Musk has failed.

In the late hours of Thursday in San Francisco, a projector was set up at a building opposite Twitter and began putting incendiary messages up against the company’s foyer. The messages ranged from fairly simple such as “Elon Musk, STFU”, to “launching to bankruptcy”, and “Musk’s hellscape”.

Musk had shut employees out of the office just hours prior, so the building is well and truly in the limelight.

Other classic hits included “$8 lies” and “proof Elon Musk is an idiot” which all feels perhaps even too tame considering how monumental the screw-ups have been. Musk has not been helped in the slightest by employees leaking internal memos which really capture how much the site is haemorrhaging trust within its staff.

Incredibly juicy sledges were projected onto the Twitter building, referencing Musk’s family past as emerald miners, his hypocrisy, and his inability to take any criticism. “Dictator’s ass-kisser” may just be the most telling of how the world feels about the South African.

Musk’s reign has seen the world lose faith in a website that already had a low public opinion. Despite constantly claiming to be saving freedom of speech, it’s resulted in a whole new wave of misinformation. But at least you could spend $8 to get a blue tick, because that’s really what matters.

Should Twitter truly fall, it’ll be a seminal moment in internet history. Following in the footsteps of previous giants like Myspace and even Flickr, it could soon become expensive vaporware. Congratulations