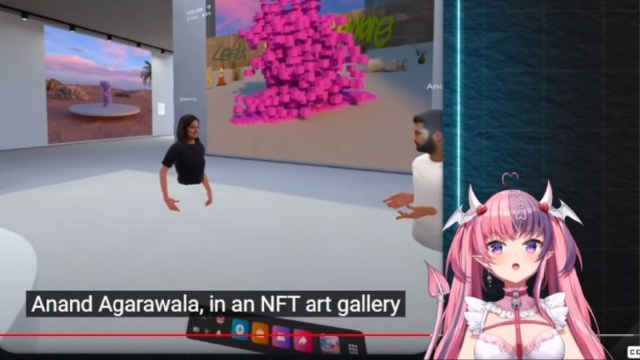 The prolific Twitch streamer and VTuber Ironmouse is poking fun at non-fungible tokens, the digital collectible that utilizes blockchain technology.

This all went down while Ironmouse was watching a rather dystopian-titled video by Wall Street Journal: “Trapped in the Metaverse: Here’s What 24 Hours in VR Feels Like.”

When a portion of the video centered around NFTs, it caused a stark reaction from Ironmouse, who exclaimed, “Oh no! NFTs!”

You can watch the moment in a clip on Twitch.

It wasn’t just the mere idea of NFTs that Ironmouse found appropriate to roast, but the rather ugly “pixilated dog” piece in particular. Check out the image for yourself for reference.

“Guys, check out this amazing art piece of pixilated dog. I paid $2 million for it,” Ironmouse quipped.

Many people in the comments were similarly unimpressed, with one user summarizing their thoughts with a series of barf-holding emojis.

Another user seemed to be disgusted at the entire notion of visiting the Metaverse and interacting with those doll-eyed avatars within: “thats uncanny valley AF.”

“I would literally rather have a PS1 polygon avatar,” was one fan’s assessment.

“EWWW” was how one user summed up their thoughts.

However, not everyone was on board the hate train, with one user writing, “love meta and nft’s.”

Many have dragged NFTs for seemingly being a tool for cash-grab schemes, especially when big corporations are involved, such as when videogame companies produce some kind of NFT related to their intellectual properties. However, proponents of the technology tout it as a way for individual artists to successfully sell their work in the digital landscape.